A Special Gift For Julie

Since it was Julie's idea to buy the lottery ticket, James thought that she should be the first member of the family to use some of the prize money. Julie told her husband that she had always dreamt of owning a little shop of her own, where she could sell handcrafted items, clothes and accessories. After having a look around Riverside, the two rabbits found a perfect little building. It needs to be renovated, but it has just the right size and the location is good, too. They bought it yesterday and are going there right now, to decide what sort of reparations will have to be made. 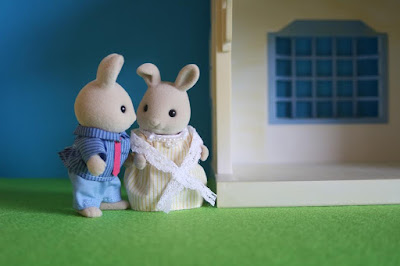 "Isn't it lovely, James?" "It's great, Julie, and we haven't even started with the renovations." "Yes, you are right! And just imagine how great it will look after cleaning and decorating." 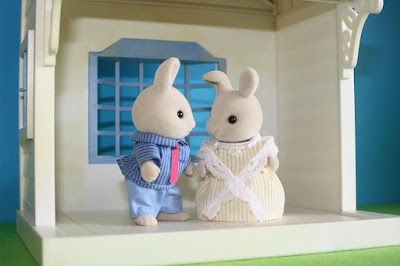 "I am glad you like the store so much, Julie. I truly think you deserve this special gift, after the wonderful surprise you have given Jemima and me on New Year's Eve. Now we can make all our dreams come true!" Julie smiles at him. 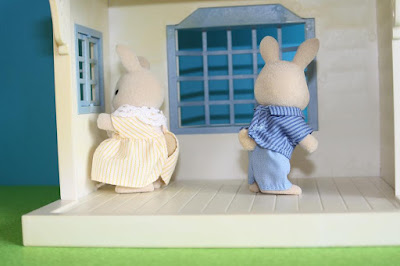 "Let's have a look at the state of the windows. This one definitely needs to be repaired, James." 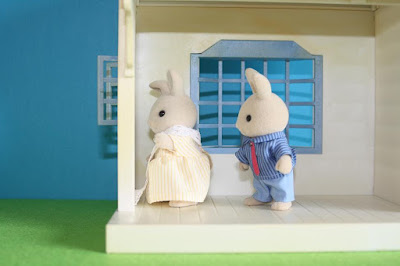 "It doesn't open and close properly and there are some nails and pieces of chipped wood sticking out from the frame." 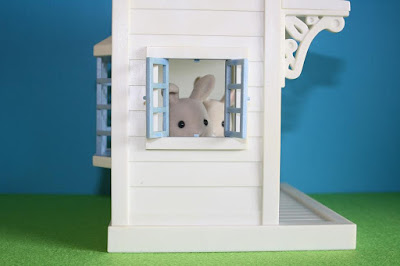 "Okay. It shouldn't be hard for me to repair that." 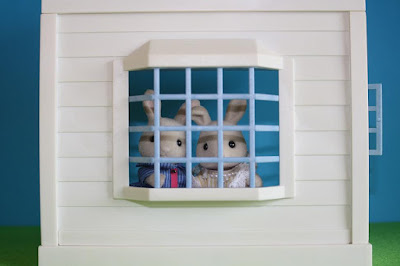 "This window looks fine though, doesn't it?" says Julie. 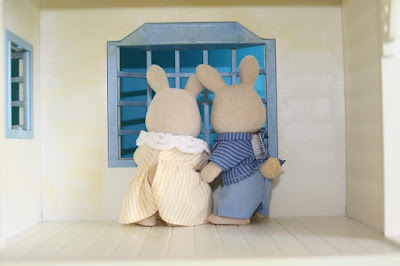 "I agree," replies James. "It merely needs a new coat of paint." 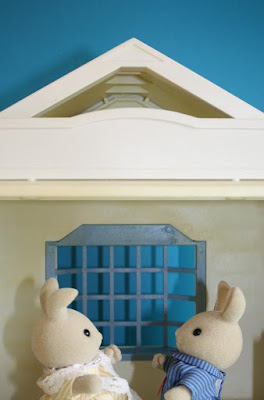 "What about the ceiling?" Julie asks. "Oh dear... I think the roof will need some work. Some of the wooden slats seem loose. I thought about it yesterday. Maybe I should redo the roofing after all. We wouldn't want it to rain in one day..."
"Oh dear, so much work. Do you think we can do this all by ourselves?" "Hmm... I think so, Julie. Reparing the roof is probably the most complicated thing that needs to be done. The upside is that the store isn't very large, so yes, I think we will be able to do this!" 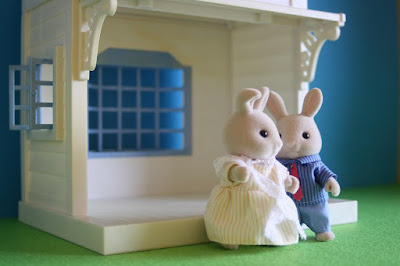 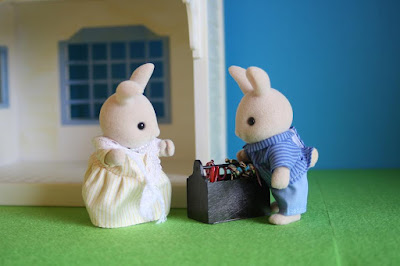 "Look at this, Julie! I got us a new box of tools! There is everything in here I should need to repair the shop." "Wow, it looks great!" 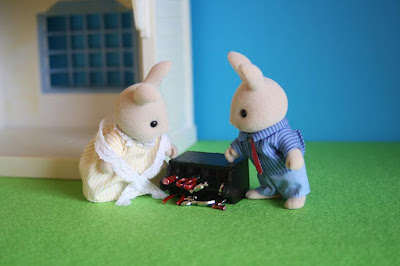 "It does, doesn't it? Have a closer look. It contains a screwdriver, hammers, wrenches..." "Fabulous!" says Julie. 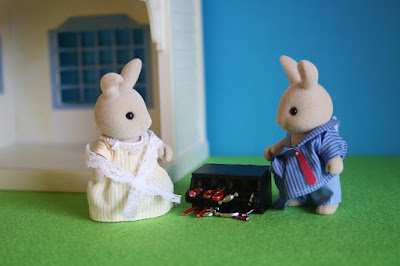 Suddenly James starts to take off his pretty blue shirt. "What are you up to, James?" laughs Julie. 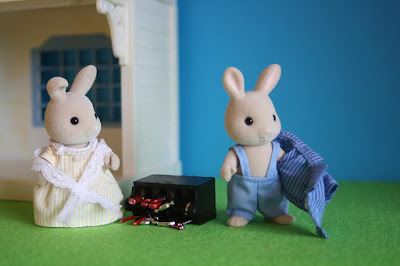 "I am going to start with the reparations right now and I do not want my new shirt to get dirty." "Right now?" marvels Julie. 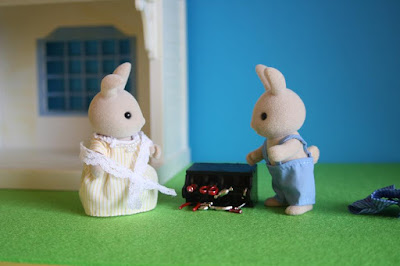 "Sure!" says James and smiles.
"Oh, but don't throw your shirt onto the grass!" exclaims Julie. 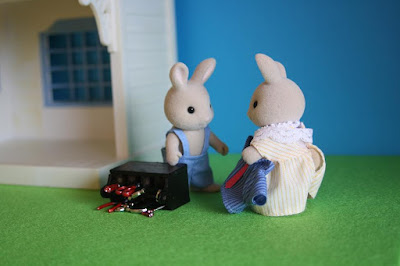 "Give it to me. I have to go home now anyway to fetch Jemima. Tamara said, she could only babysit until noon." "Take care, my dear!" says James. "You too. And thanks for being so motivated about repairing the store! You are the best!!" says Julie and walks towards Riverside Lodge to take care of their little girl. 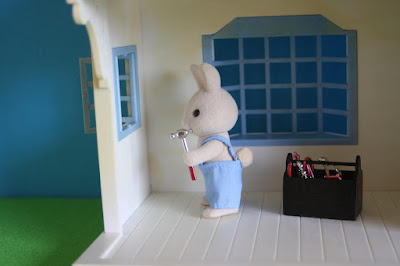 Immediately, James starts to repair the faulty window, while he sings his favourite song by Peter Gabriel: 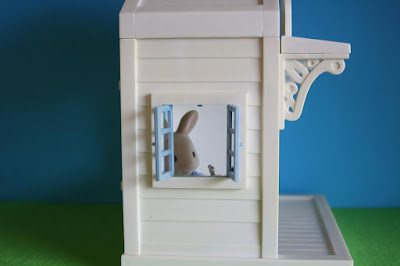 He has just finished repairing the window, when... 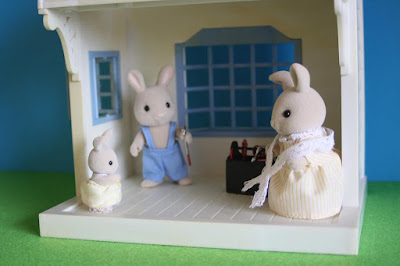 ...Julie and Jemima pop by.  "I need to go to the bakery to prepare a cake someone ordered for tomorrow. Would you like to come with me, or stay with Daddy, Jemima?" "Daddy!!!" squeals Jemima.  "Alright," says James. "Stay with me, my little muffin, and help me!" "Oh yes, Daddy! Jemima can help!" 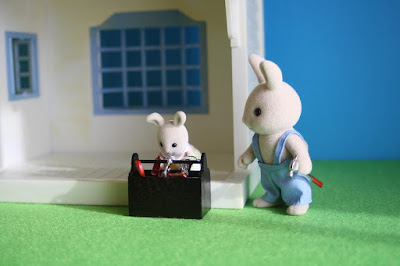 A minute later, Jemima is bending over the tool box, curiously looking at each compartment. "Do you want me to tell you the names of the tools?" James asks. Jemima nods, so he lays all the tools on the grass next to them. 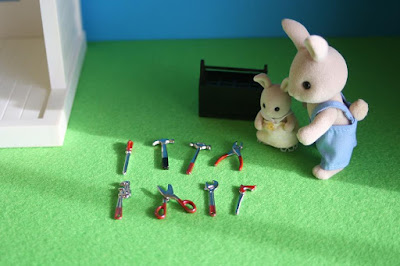 "The first tool is a screwdriver. Next to that you can see a large hammer and a smaller hammer. The next tool is called pliers." "What is it for, Daddy?"  "Pliers allow you to grip objects of varying sizes. In the second row you can see a pipe wrench, a pair of large scissors, a standard wrench and a little saw."
Jemima is very interested in all of this. Although she has seen some of the tools before, like the screwdriver for example, her father seems like some sort of great magician to her, because he knows all the names of these strange objects and exactly what to do with them.

"Daddy, you are smart!" she says to him and James has to laugh. "So are you!" he tells her. "I am sure, you have learned something new today."