Remember how Julie and Hester didn't want to do "too much" decorating in A Home for Fudge, just "a little" so that Fudge would feel more comfortable inside his new house? Weeeell...

Let's see how that turned out... 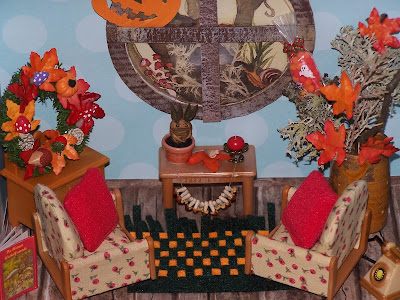 BAM!!!
I guess they might have gone a teensy little bit overboard...

The autumn wreath on the left is the one Hester made during our crafting session. Giving Fudge the little red book about gnomes was Julie's idea, as well as the telephone you can see on the right and the bag of orange sweets. The grumpy looking plant on the table is a potted mandrake called Crabbie Carlie who was another donation of Hester's, as well as the red candle, vase, twigs and autumn leaves. The jack-o'-lantern cut-out on the window is a gift from the Peachblossoms. Finally, I made Fudge a special little welcome gift, too. I wove him a green and orange felt carpet, because I didn't want him to get cold paws when sitting in his armchair.

On the morning after Fudge's arrival he hadn't even seen his living room and kitchen yet, because he had been sooo tired that Julie and Hester had tucked him into bed immediately. So imagine his surprise when he got up in the morning, went downstairs and saw all this. 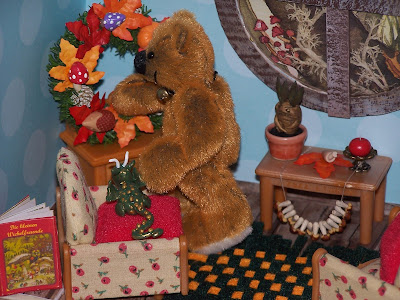 "Pickles! Oh Pickles!" he exclaimed. He couldn't say much at first, because he was so overwhelmed at the sight. Then he went towards Hester's wreath to look at the little hedgehog figurine. 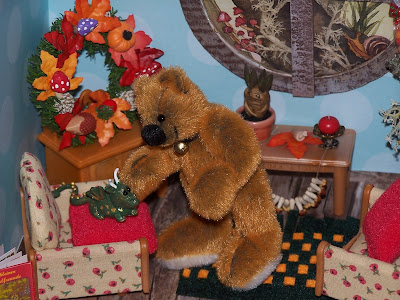 "Pickles, do you remember the story of "A Little Princess"?  Where Sara and Becky wake up one morning and their cold and empty attic room has been turned into a room of luxury? Doesn't this feel similar?" whispered Fudge as he caressed Pickles' ear. 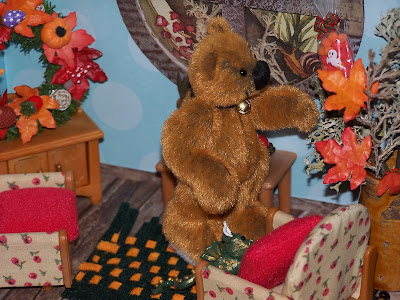 "Look here, Pickles! There are even some Halloween candies stuck between these branches. And it's not even Halloween yet!!" 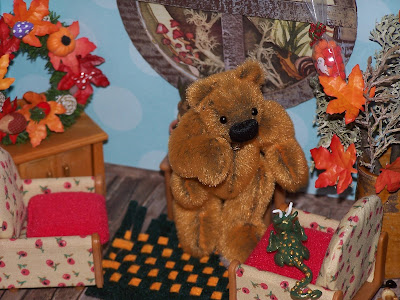 "This is the second time since our arrival in Riverside, that I have to rub my eyes because I can't believe what I'm seeing..." Fudge managed to say before choking up. Pickles the dragon sniffled in agreement. 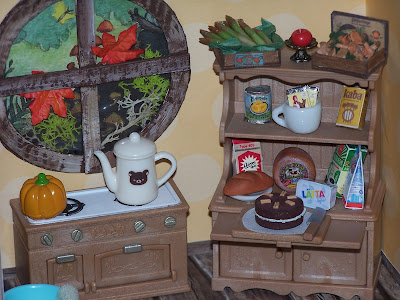 Oh dear... How were these two going react when they saw the kitchen with all the delicious foods??
As Hester imagined Fudge to be quite a gourmet, she had bought him imported asparagus and mushrooms at the market. Other Sylvanians had donated cocoa powder, canned peaches, chocolate bars, bread, cheese and flower, coffee, butter and condensated milk. Also, there was a large pumpkin standing on the stove and a freshly baked chocolate toffee cake... 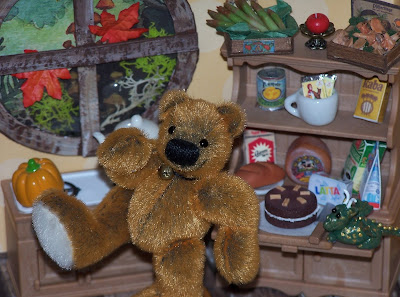 To my relief the two did not break out in a concert of tears. Instead, Fudge did a little happy dance and Pickles jumped onto the cupboard next to the cake and let out a contented sigh. "We are going to have cake now," he thought. 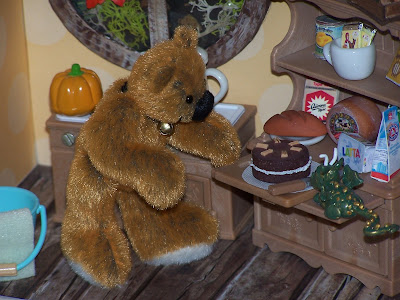 "I think we should call our new home Caramel Cottage! Wouldn't you agree, Pickles? Because it's just as sweet and delightful as caramel!" Pickles nodded and pointed toward the cake. "We have some?" he whispered. 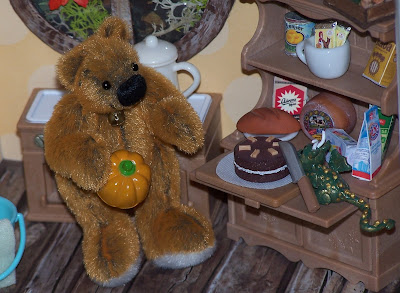 Then Fudge saw the pumpkin. "Looook! Our own pumpkin! We can make pumpkin soup from this! And pumpkin pie! And maybe even pumpkin toffee!" Now Pickles was done waiting. He picked up the knife and started to cut the cake.
"Pickles!" Fudge exclaimed and the little dragon froze. " I just remembered, I don't know how to cook... Oh dear... no pumpkin toffee for us... Unless... We could ask Hester and Julie for some cooking instructions and some recipes!"

Then Fudge remembered something else. "Wasn't there something lying at the foot of the bed this morning? Let's check that out!"
Pickles sighed. He knew then that the cake would have to wait. As well as his poor empty dragon tummy. 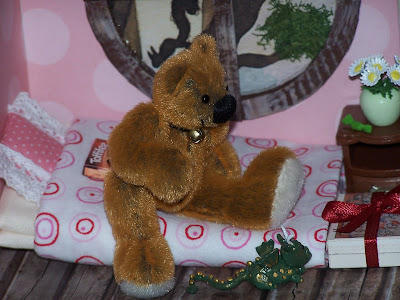 Back upstairs Pickles saw that Fudge was right. There really was something at the foot of the bed. And this something was wrapped in a red ribbon. "It's a present, Pickles! Another one!"
Pickles' tail whipped to and fro in nervous anticipation. Maybe this something was filled with chocolate brownies or caramel truffles or Halloween cupcakes!

What do you think is inside the package?