Bedding for the Baby 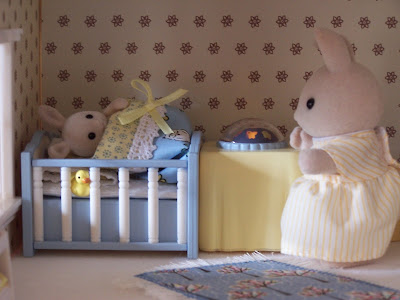 After her adventure with Hester's book of spells, Jemima was very tired, so when the two rabbits arrived back home later that afternoon, Julie tucked her daughter into bed for a nap. Quackie was peeking through the bars of the cot. She wasn't so crazy about naptime, as she didn't feel tired at all. 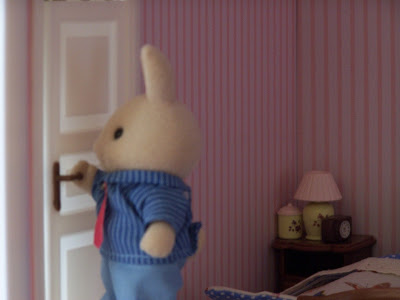 James had spent the day instructing new employees at the Water Mill Bakery. Now he was eager to spend some time with his family. He hadn't met anyone downstairs, which is why he decided to check if they were inside Jemima's bedroom. 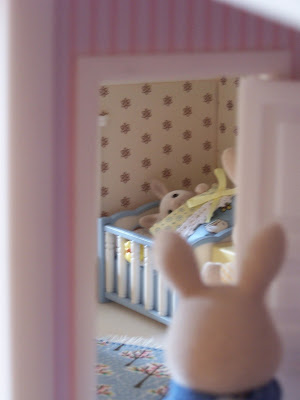 "There you are, my angels," James said, as he entered the room. Jemima looked so adorable inside her blue and white cot. 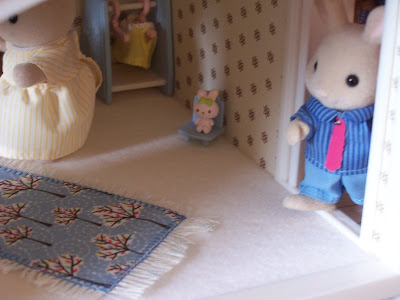 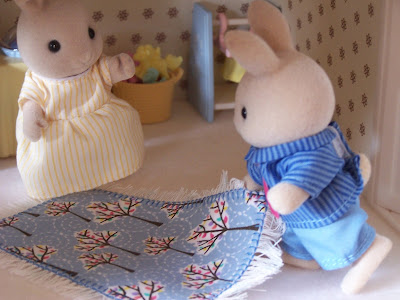 "Yes, dear!" Julie answered. "Jemima received a big package from aunt Kathy in the mail today! She sent this beautiful handmade rug as well as two handsewn bedding sets. Isn't she the best?! I told her several weeks ago on the phone that Jemima didn't like her plain white bed linen and blanket, so she decided to send her all this as a surprise for her new room!"

James bent down and picked up a corner of the rug. He checked out the material (it was pleasantly soft) and whistled approvingly through his front teeth. "This is lovely!" James agreed. "Aunt Kathy even added carpet fringe. Very cosy." 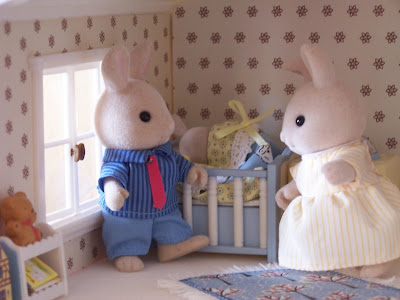 When James went to say hello to Jemima she had already fallen asleep. "Aunt Kathy's bedding looks gorgeous," James whispered. "I am sure Jemima will sleep even better now. And I can't believe how much more inviting the room looks with this pretty rug in the centre!" 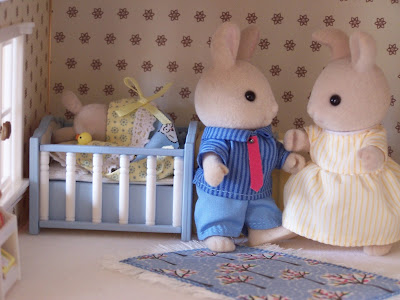 "Yes, didn't she just find the perfect fabrics to match Jemima's furniture? We should invite her over for a long weekend as soon as she gets a day off from work." "That would be nice," James nodded. "If the weather is warm and sunny we could have a barbecue. By the way, how was your afternoon at Hester's?"
"It was great, dear. She made the most delicious vanilla doughnuts and we had a lovely conversation about talking plants. Jemima played with the triplets. They loved Quackie, you know."

Suddenly, she was interrupted. 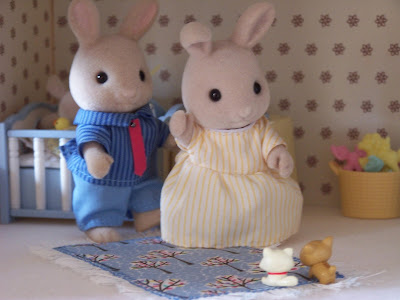 "Meow! Meow, meow, MEOW!!" said Molly and Pip while looking at James and Julie reproachfully. "Oh, you poor little things, you must be so hungry! Let's get them out of here, James, before they wake up Jemima." 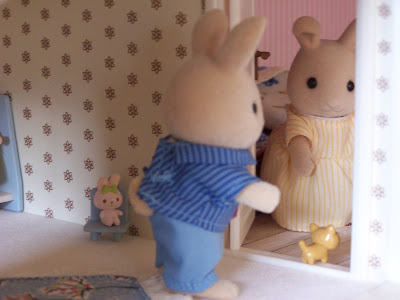 Quickly but noiselessly the adults left the room. Julie opened the door and let Pip toddle by himself while James carefully picked up Molly to carry her out. 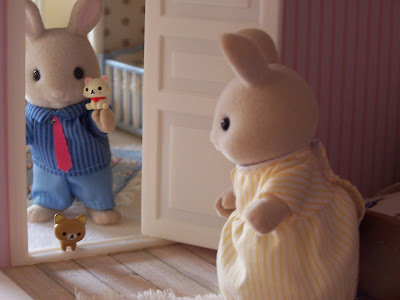 "Come on sweetie!" Julie coaxed. Pip was so tiny that even a door frame seemed high to him, and his legs were the shortest little stubs you have ever seen on a cat, but eventually he made it over the sill and they all went downstairs where James and Julie prepared a meal for the kittens. 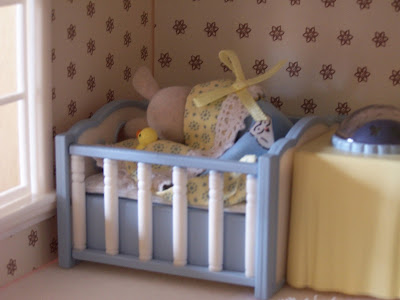 Before James closed the door behind him, he took one last look at how calmly his daughter was resting underneath her new blanket.

Little did he know that while Jemima was lying there so peacefully she was actually having a very exciting dream...

You can check out more of Kathy's items on
www.kathyssewnlabel.etsy.com

Thank you for all your comments.