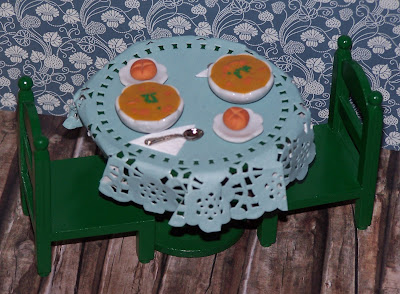 It is evening and Hester Hogwart has seen her last client for the day. She has prepared supper for Hamish and herself. To be honest with you, my readers, I don't know what kind of soup this is... You never really know with Hester, as she loves traditional wizarding cuisine and thus prepares the strangest dishes... The soup smells rather pleasantly of curry, though. 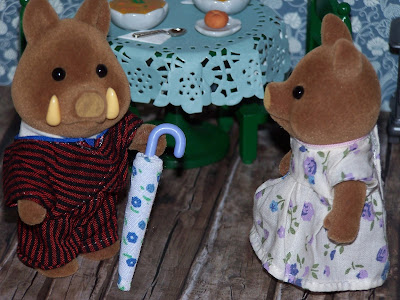 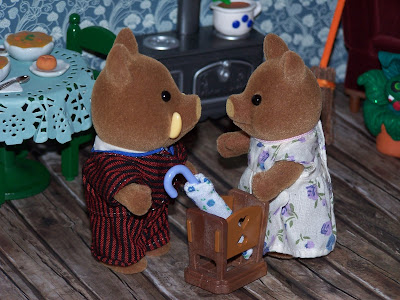 "Since it didn't rain for so long I put it in the closet, so Ruff wouldn't gnaw on it. I'll go fetch it for you," Hester says and returns with the stand.
"Thanks Hessie. Now where are my three little bacon rolls?" Hamish asks, referring to the triplets. He starts to take off his jacket. 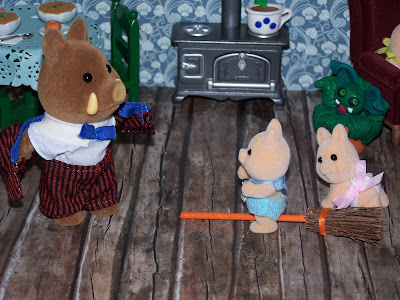 "Dada, dada, look!!" calls baby Henry as he runs into the parlour with Hester's broom stuck between his chubby legs.
"Riding Mommy's broom quicker than the wind, eh? What an excellent wizard you're turning out to be, my boy. Just as great as your mother!"
"Dada!" cries Hope. 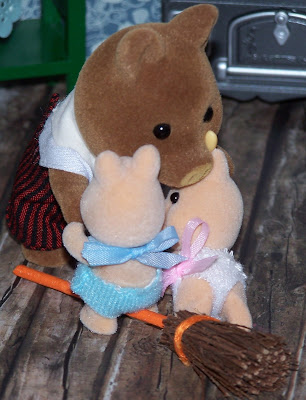 "Come here my little witches and give me a cuddle! 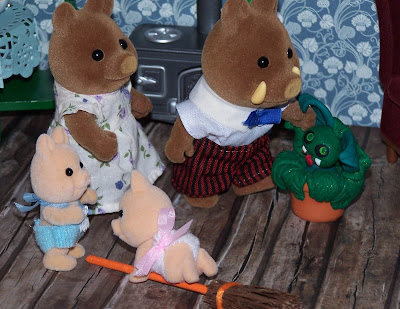 Then Hamish greets Ruffle by tickling his ear.
"Where is my little Hattie?"
"She was sitting in the armchair a minute ago," says Hester. 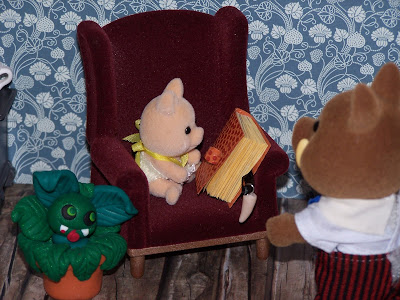 And really, there she is, staring at her mother's book of spells. 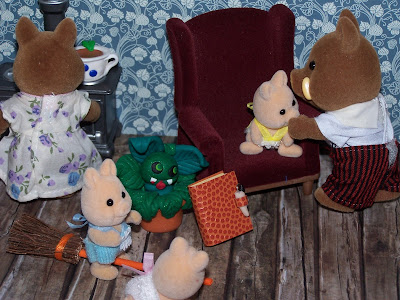 Hamish closes the book and puts it on the floor.
"Now I know you're all eager to become professional witches like your Mommy, but you shouldn't play with this old thing, Hattie, it's powerful stuff."
"Was she opening my book again, Ham?" Hester shouts from the kitchen, slightly annoyed.
"Oh no, I caught her just in time." 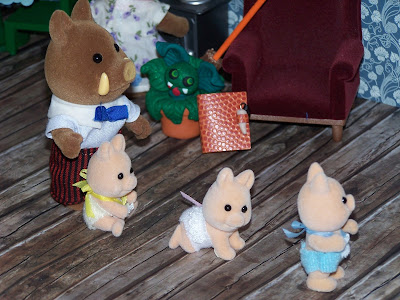 "Come along now, the three of you!" Ham playfully orders, "Even dilligent little wizards need to sleep once in a while!"
The siblings waddle off into their bedroom. 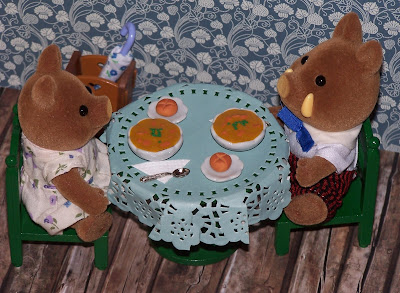 After tucking the children into their beds, Hester and Hamish finally take a seat at the table.
"Ahhh, what's this now?" Hamish asks. "It looks delicious."
"We're having mouldy carrots and curry soup. Oh, and I also got us some cheesy bread from the Periwinkles' bakery. Enjoy!" 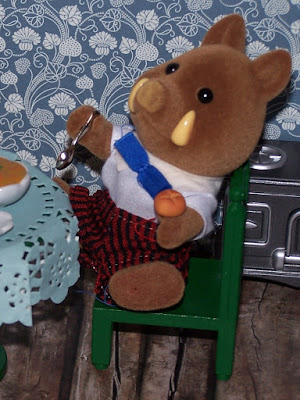 Hamish is just about to bite into his bread roll, when they hear a loud "POP!!!!" that sounds like an explosion.
Hamish almost falls from his chair. "What was that, Hessie? It came from the kitchen, I think!" 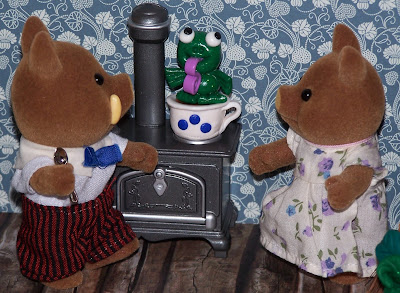 "Another one???" Hamish hears Hester say, as he follows her into the kitchen. There is a big, fat, green frog sitting on top of Hester's pot.
"Ohhh, they've been popping out of my potion all day long," Hester explains. "I'm not sure why, but maybe that's the "unfortunate side-effect" mentioned in the recipe..."
Hamish winces. "What do you mean, they've been popping out all day? Are there more??" 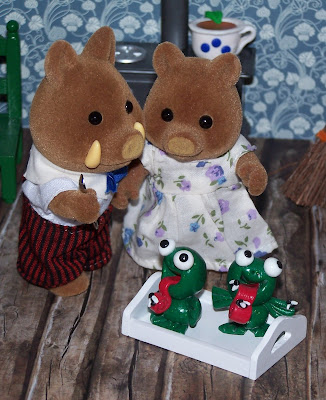 Hester opens the back door and comes back into the kitchen carrying a large white tray which she places on the floor in front of them.
"Look!" she says, pointing at the tray, "These two exploded from my potion earlier today! I smeared some honey on the tray to attract flies and now the frogs have gone crazy!"
The frogs on the tray are covered in flies and it seems like they are laughing hysterically.
"Teheheheheeeeeee! Hahahaha-haaaaaa!"

"My goodness, they seem quite drunk, don't they?" Hamish chuckles. "Do you suppose it's from all the flies or from the honey?"
"No idea, Ham, but they really are two giggling weirdos, aren't they?" Hessie answers, just before starting to laugh herself. 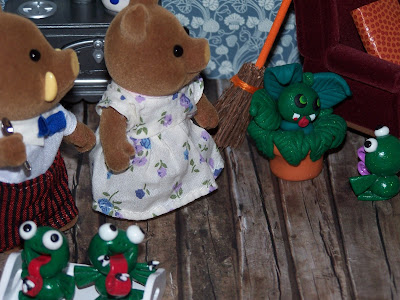 "Where's the other one?" Hamish asks, still carrying the soup spoon in his hand.
"There he is," says Hessie. "He seems to be making friends with Ruff!" 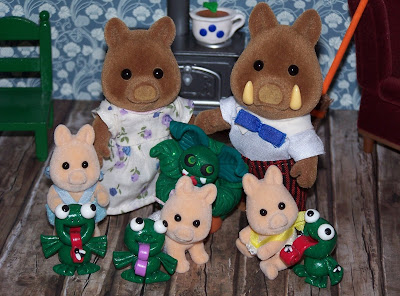 Several days later, the Hogwarts make this lovely family photograph. The three frogs called Bounce, Wiggle and Slurp by the triplets are now part of the family, too.

Here are all the fimos made by me that were included in this story and the last. 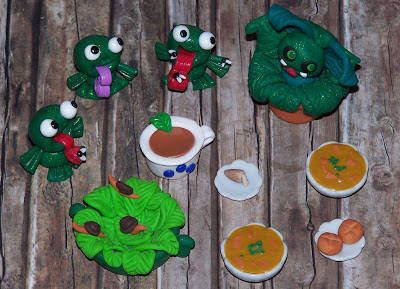 If you liked this story, please contribute by writing a comment
or sending a juicy fly for Bounce, Wiggle and Slurp.
Thank you!! :))

Email ThisBlogThis!Share to TwitterShare to FacebookShare to Pinterest
Labels: Halloween, My Fimo Miniatures, The Hogwarts