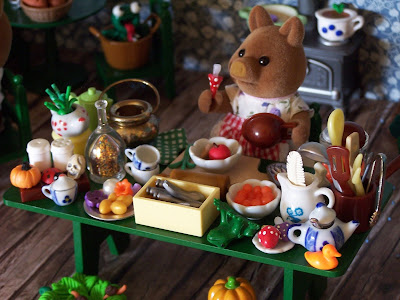 Something unusual is going on at the Hogwarts'. Unusual even for the Hogwarts, I mean. Hester has been poring over her spell books for hours and now she is standing at the table of her magic lab picking out ingredients.

"Why is this extraordinary? Hester is, after all, a witch," you might ask.
Well yes, of course she is, but the truth of the matter is she never ever does magic on Sundays. Except today... 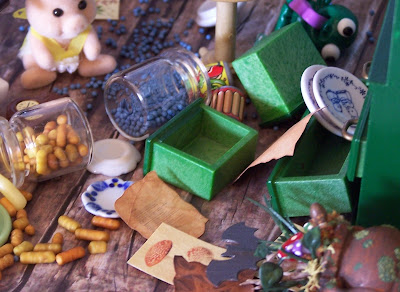 As we enter Hester's study I realise immediately what the problem is... The entire contents of her magic dresser has been strewn about. Documents about botany  and magic are littering the floor, drawers have been torn out of the dresser and potion ingredients are rolling over floorboards. 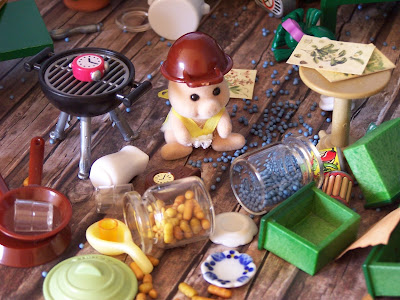 In the midst of this chaos little Hattie is sitting with a bowl on her head to shield her from further "attacks". Who (or what?) has been carrying on in here in such a frightful manner?
Well, dear readers, there is only one explanation for such a mess. It's plain and simple: a poltergeist. 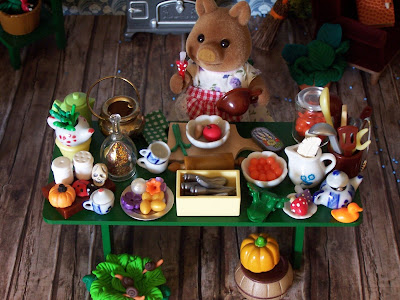 "It occured last night," Hester explains. "We heard some loud thumping noises - Hamish and I thought it was raccoons going through our outside garbage bin. But when we got up this morning, we saw what had actually happened..."
Hester has been frantically trying to find a way to get rid of the poltergeist ever since. It's not that she's afraid of poltergeist activity. Not at all. But, as you can see, such nightly invaders can make an awful mess of peoples' furnishings and also keep them from sleeping with all the knocking and banging they like to do.

And Hester will not let anyone come between her children and their right to a healthy night of sleep, oh no siree! 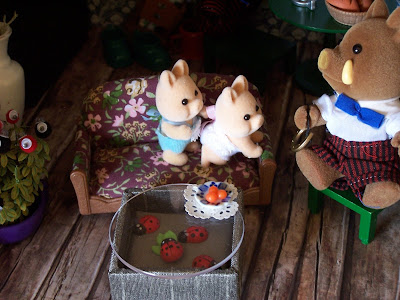 The rest of the Hogwarts are in the living room. The googly-eyes plant, a new addition to their family is watching Henry and Hope listen to their father as he explains to them the special history of a family heirloom, which is an old horseshoe from his great great grandfather's farm. 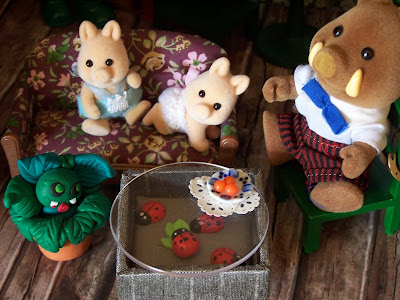 After a while, Hamish fetches Ruff the talking plant from the back of the cottage, as he thinks he might be interested in hearing this story, too. 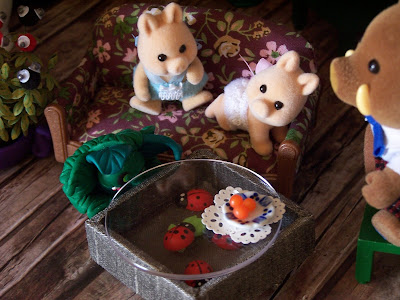 Hamish is having problems concentrating and he gets up again to check on Hester. She still hasn't come up with an antidote to the nightly invader. Meanwhile, Ruff has discovered the ladybugs crawling around inside the Hogwarts' living room table. The Hogwarts don't have a television set, you see. Instead, if they ever do get bored or feel the need to sit on the sofa and relax, they can watch their pet bugs crawl around underneath the glass table top and go about their business.

Ruff is peering in through a slit and starts to make a strange rasping sound. It seems like he is beckoning the ladybug to come out... 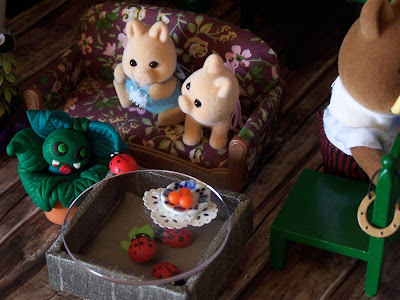 Just as Hamish is leaving the room, Henry and Hope watch the ladybug  squeeze itself through one of the tiny air holes in the corner of the table. It is crawling towards Ruff. Ruff is beaming. And then... 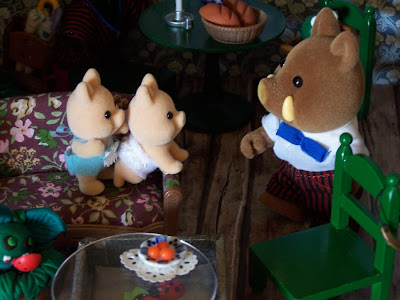 Suddenly, Ruff snatches the ladybug's head with his mouth!

"Dada, Dada!!" the siblings cry. "What is it, my little bacon rolls??" Ham asks as he comes back into the sitting room. 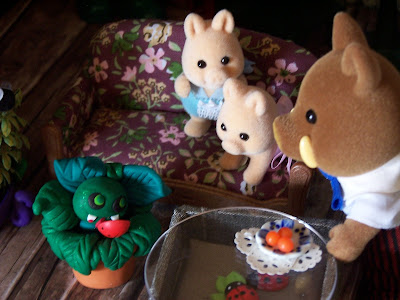 Hamish leans forward over the table and sees Ruff with the ladybug. 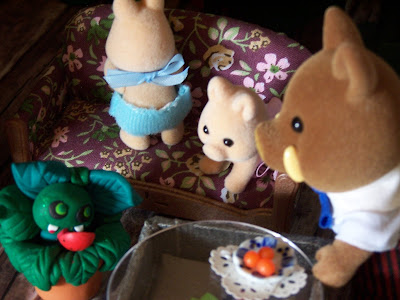 "I can't watch!" squeals Henry and turns around hurriedly, just as Ruff bites into the ladybug's head and everyone hears a loud crunching sound. Hope whimpers. "Ruff's eating our bugs, Dada!" 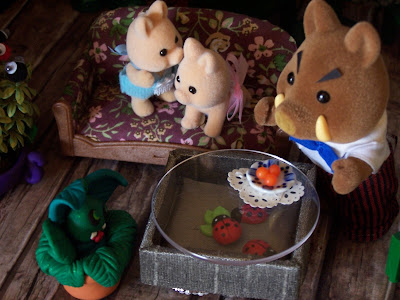 Email ThisBlogThis!Share to TwitterShare to FacebookShare to Pinterest
Labels: Biwubear Miniatures, The "Poltergeist Problem", The Hogwarts