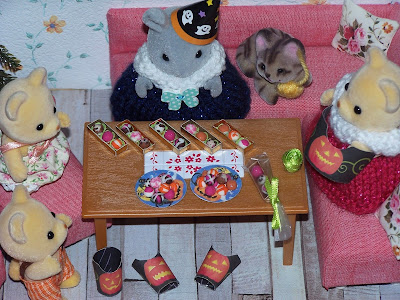 Here it is, finally, the post about my giveaway! Orangine Peachblossom was so friendly to host it at her house. As you can imagine, Teresa Babblebrook and her have become good friends since the workshop on All Hallows' Eve, so she came along, too.
Back in October Orangine had made some colourful truffles. It was a "Halloween Special Limited Edition" and sold out as quickly as you can say "yum!". Luckily for us, so many Sylvanians asked her for more that she decided to make another batch  and promised to donate some for the giveaway! 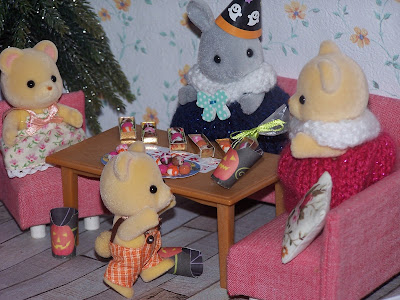 Paul is a fan of his mom's chocolates, too...

"Mother, mother! Please, can I have another packet too, PLEASE??" he said, jumping up and down in front of her. 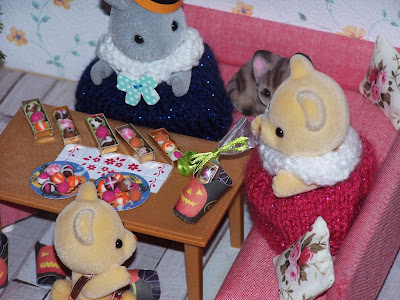 "Paul, you silly little cub! You haven't even eaten the packet I gave you on Halloween yet," Orangine answered and smiled. 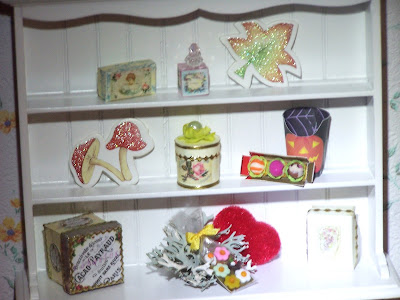 As you can see, Paul's Halloween truffles were lovingly displayed in the living room cabinet, still waiting to be eaten.

While I'm at it, why don't I show you some more photos of the Peachblossoms' living room? 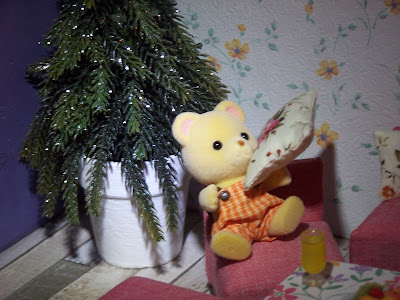 Here is Paul a few days before, relaxing on one of the settees. Behind him is the Peachblossoms' Christmas tree. They have gotten it early this year, but haven't decorated it yet. 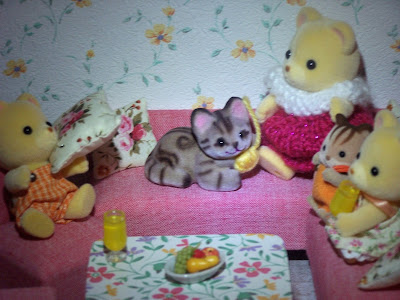 And here is what the living room usually looks like, when Mother isn't wrapping up handmade chocolates. Little Ralfie Hazelnut came for a visit that day. Isn't it adorable that he's smaller than Aster, the Peachblossoms' cat? 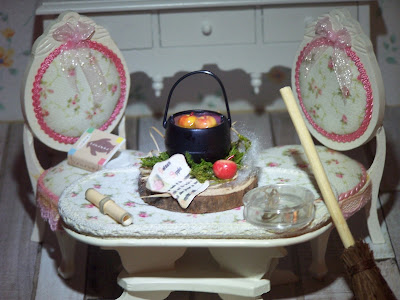 Finally, here  is Portia and Paul's crafting table next to the living room cabinet. Ever since the workshop, Orangine has been using it to display her apple potion, certificate, healing moss and magical broom proudly for everyone to see. 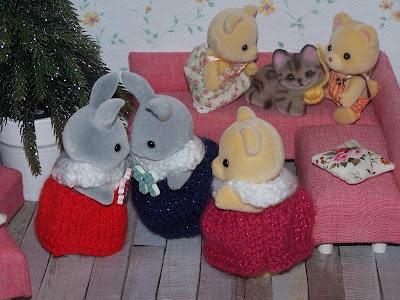 Now back to our giveaway. When Orangine had finished wrapping all the chocolates, she and Teresa cleared away the worktable and somebody knocked on the door. It was Teresa's younger sister Tanya Babblebrook! (I've never mentioned it, but Teresa has MANY brothers and sisters...) 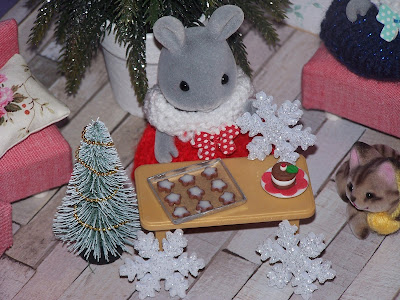 Tanya has been working as a trainee at SCMCB (Santa Claus's Magical Christmas Bakery, duh!) in Finland for the past year and has now come back to Riverside to look for a job elsewhere. She brought along a small tree, three large sparkly snowflakes, a tray of fresh homemade cinnamon cookies and a Christmas cake made of chocolate and cream. 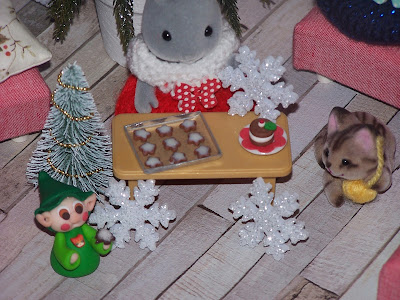 Suddenly they heard loud chewing noises and something small and green scurried into the living room. Crunch, crunch, crunch, swallow.
"Oh, I almost forgot him!" giggled Tanya. "Santa asked me to take little Munchie with me. He hopes he will learn better manners and discipline wherever we are going next." 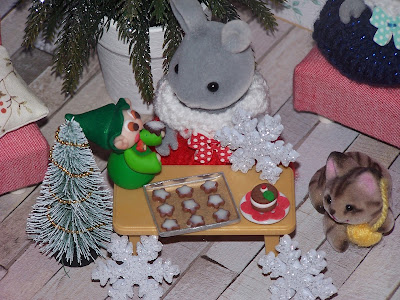 Munchie jumped on the table, smacked his lips and swallowed another piece of his cookie.
"Want a bite?" he asked Tanya rather gloomily. "No, thank you," she said. This made him smile again, since he had only asked her, because Santa had told him to always be generous to others. 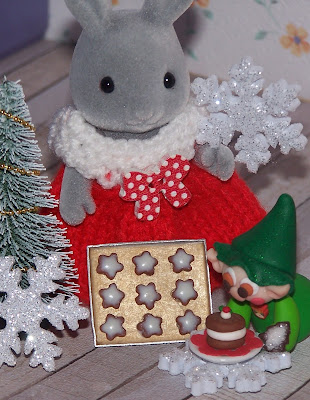 So, in case you haven't realised until now: Tanya in her red woollen dress with the dotted bow and all her Christmas goodies are actually part of the giveaway. :) Munchie, the gluttonous Christmas elf is coming along, too. Sorry, about that, but it's Santa's orders, I can't do anything about it!! :/ 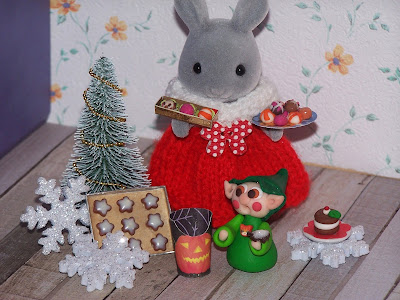 Here is a picture of the entire giveaway. You will get everything you see on this photo and the only thing you have to do is:

The winner will be drawn on December 15th. 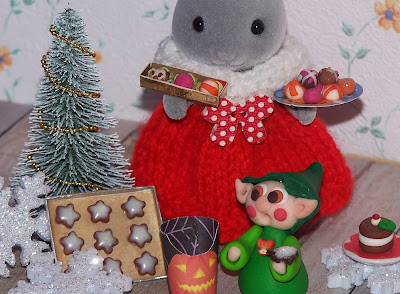 Tanya's beautiful dress was made by the talented Jill.

The Christmas biscuits, cake and Munchie the elf were made by me.

The Halloween truffles with their golden packaging were also made by me and they have a special feature included, but unfortunately my camera did not cooperate, so I can't show it to you. The special feature is that the white chocolate is made from glow-in-the-dark fimo, so if you hold a torch to them for a moment and then turn off the lights, they will actually glow. :)

HOPE TO READ FROM YOU ALL :)