While Jemima Periwinkle's parents are out to prepare the Water Mill Bakery's reopening, she is at home with Tamara Babblebrook, her babysitter for the day.


Jemima has never had a babysitter before. Up to now she has always been cared for by Mommy and Daddy. She is very curious about this new person. Will Tamara play with her as well as Mama does? Can she be as funny as Papa? And does she know how to tell a good story? 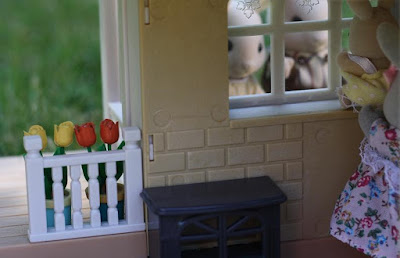 In the morning, as her mother and father leave the house, she waves them goodbye through the window. 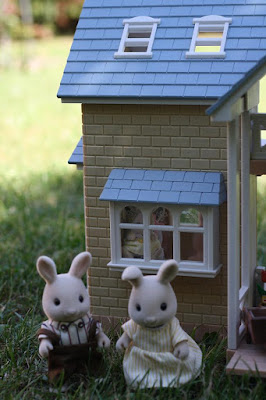 She watches them leave until she can only see the tops of their ears. 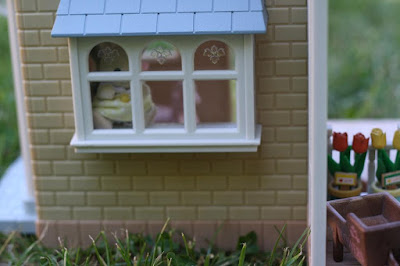 Where did that raindrop, which is slowly rolling down her cheek, come from?

But baby Jemima cannot worry too long about her mommy and daddy leaving, as she is very excited about starting to play. "What would you like to do?" Tamara asks her. "Horse!" Jemima squeaks. "It's sunny and warm, let's take the horse outside," Tamara says. 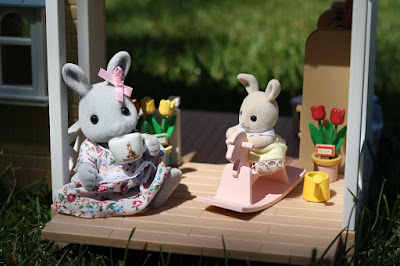 Out on the porch, Tamara helps Jemima onto the pink rocking horse. Then she sits down to a cup of tea. 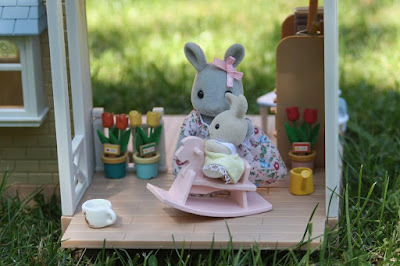 "Fasta!" Jemima orders after a while, so Tamara gets up to push the horse. 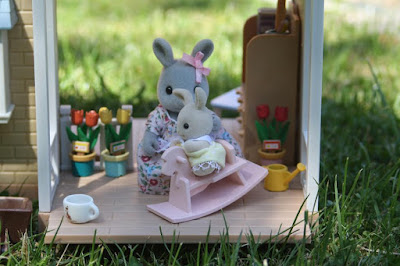 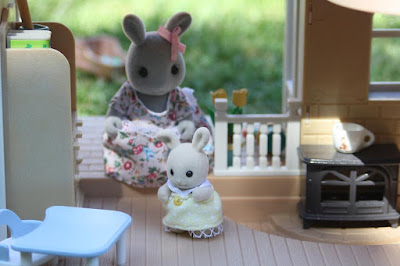 Some time later, Jemima rushes back into the house. She wants to play school. "Mima teacher," she says. Tamara is going to be the pupil. She would like to have some classmates, so she goes upstairs to get Quackie the duck and Hans, Jemima's teddy bear. 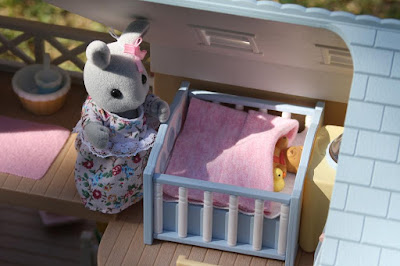 Look at those two slugabeds! 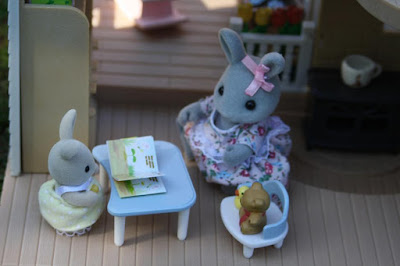 Jemima does not know how to read yet, but she knows how to make up a story. So she opens a book and pretends to read to her pupils. Tamara is a very good girl and listens to her attentively. Hans and Quackie, however, chatter with each other endlessly. 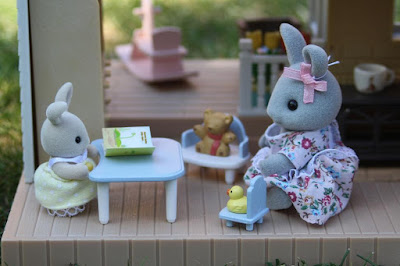 Jemima decides to separate the two chatterboxes. Cheeky as they are, they continue interrupting class by cutting each other silly faces until both of them explode into laughter. 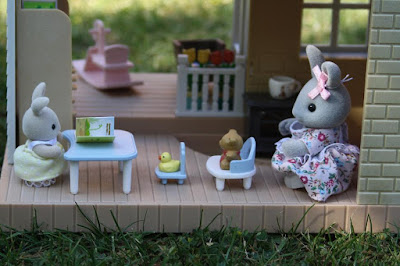 So Jemima rearranges the seating again and places Quackie in the first row, Hans in the second and Tamara in the last. She is a very strict teacher. 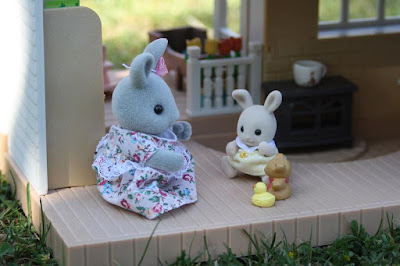 After a while, Jemima decides she would like to hear a story herself. So Quackie, Hans and herself gather around to listen to Tamara's fairy tale. It is a good one! Maybe she will tell it to us too, one day. 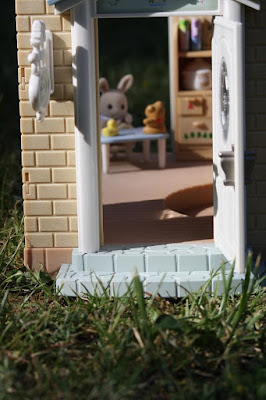 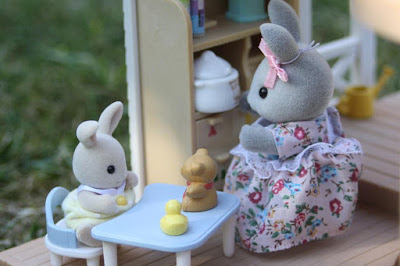 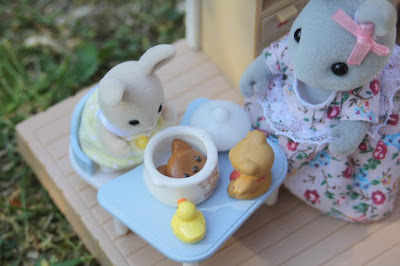 What a marvellous cookie! It is so big that Jemima, Quackie, Hans and Tamara can share it. 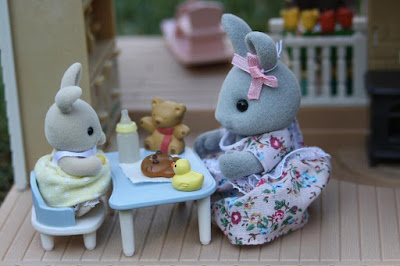 Tamara gets a bottle of milk for Jemima, and they all start to eat until there is not a crumb left. 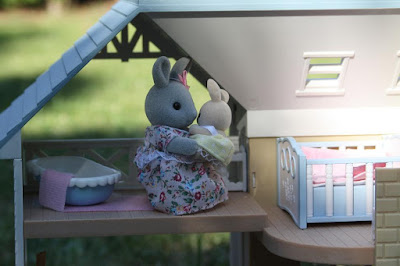 Jemima's eyelids get very heavy. Her ears are drooping more and more, as well as her head. She can hardly keep awake. "Mima nap," she mumbles. Tamara carries her to her room, so she can have a rest until her parents come back. 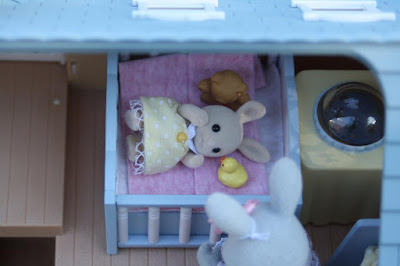 Before Tamara goes downstairs to clean up, Jemima gives her a lovely smile. 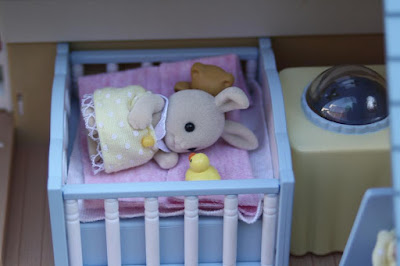 When Tamara has left, Jemima wants to know if Quackie enjoyed herself today. "Like Tammy?" she asks her. Quackie nods energetically. 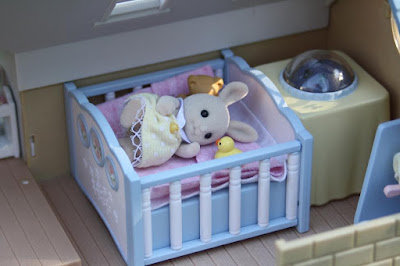 Jemima is relieved, as Quackie's opinion is very important. "Mima like Tammy, too," Jemima whispers.  "Very."