Have I ever told you guys about the time Julie and Jemima had tea with the Hogwarts? Not yet? Okay, then maybe you should read this post, because something very peculiar and astonishing happened that day... 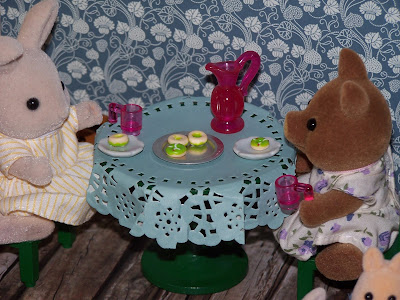 "Hester, these vanilla donuts smell delicious!" Julie praised her friend. "Well, I know you aren't very partial to maggot icing, so I made some for you without and instead added some vanilla to the mixture."

Julie was having afternoon tea at Hester's house and had brought Jemima along to play with the triplets. 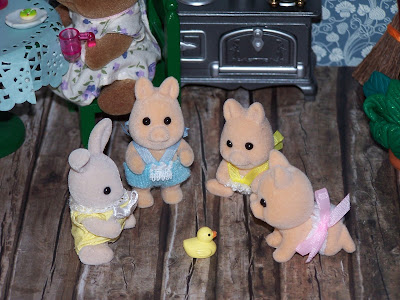 Jemima was seated on the floor of the cottage with Henry, Hattie and Hope. The triplets loved animals, yet they were more used to playing with beetles, snails and talking plants than with yellow rubber ducks, so they were quite intrigued by Quackie. 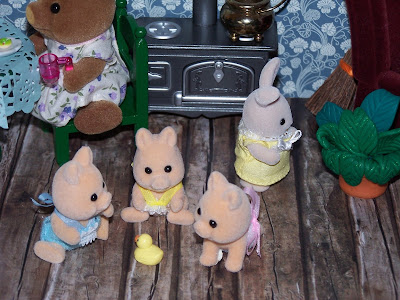 Jemima on on her part was quite intrigued by the witchy interior of the Hogwarts' home and took advantage of the triplets' fascination with Quackie to look around. 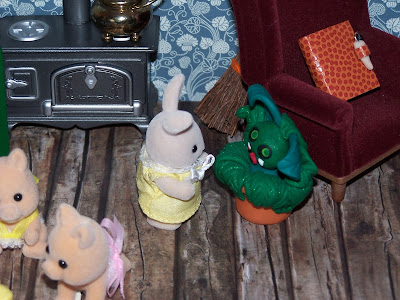 First she said hello to Ruff, the Hogwarts' talking plant. Ruff said hello to Jemima and then went on to observe the little rabbit girl with keen interest. 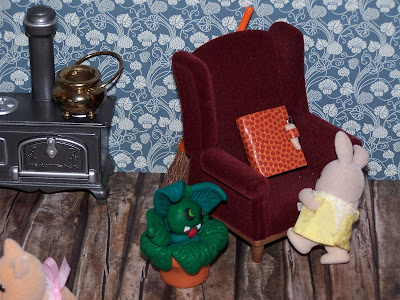 Next, Jemima climbed onto Hester's dark red armchair. She had heard her mommy talk about Hester's powerful magic book to her daddy on occasion and was curious to see what all the fuss was about. 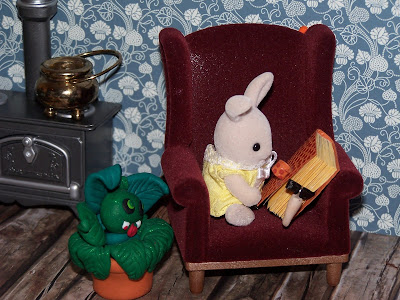 She sat down and looked at the book. It was covered in a scaly looking leather binding. She touched it. It was rough and soft at the same time and had a strange smoky smell to it. The clasp consisted of a dark black ribbon and something long with a sharp tip that looked a lot like a tooth. Was this a dragon's tooth and the binding made of dragon's skin? Jemima shuddered.

Still no one seemed to be paying attention to her. Her mom was talking to Hester about Cat Shelter Deluxe and the triplets were oohing and aahing over Quackie.

So Jemima unfastened the clasp and opened the book. 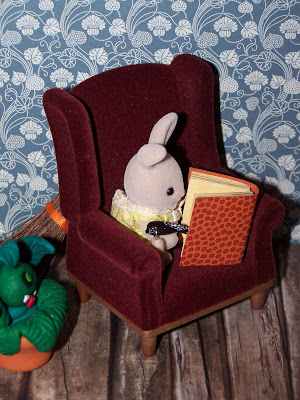 She could hardly believe how pretty the two pages were that she was looking at. She admired the squiggly old writing framed by detailed drawings of spectacular beings. There were strange unknown plants at the bottom, and dragons and fairy-like beings depicted at the top. And, then, when she had another look at the writing, something strange happened.

As you know, Jemima is very little and does not yet know how to read or write. Nevertheless, as she looked at the words printed on to those pages so artistically by one of Hester's ancestors, she suddenly felt them GET INTO HER HEAD AND READ THEMSELVES TO HER. It was the strangest and yet most familiar feeling she had ever had. Simply by looking at the letters she could suddenly hear their meaning inside her head. The book spoke to her and she listened.

It said,
"Abra cadabra,
In the blink of an eye,
To countries and cities of legend
I fly.

Abra cadabra,
Cadabra caday,
Take me to Storyland,
Take me away!" 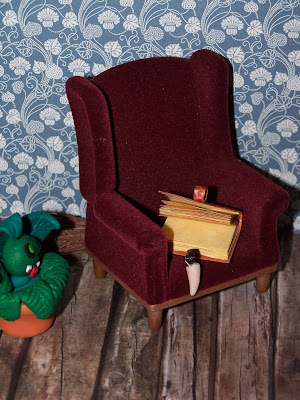 Nobody in the room noticed the faint popping sound made by the spell or the sound of rustling pages as Hester's book fell onto the seat of the armchair.

Only Ruffle the plant had witnessed Jemima Periwinkle disappear into thin air.