As I've mentioned before, I didn't get to the train station in time to make photos of Fudge's arrival. Fortunately, James Periwinkle was there and took his camera along! 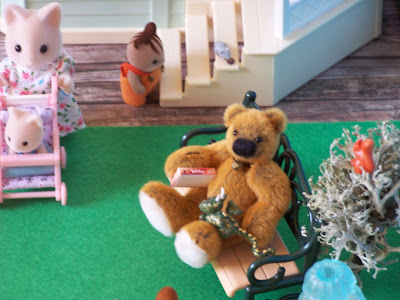 He took some photos of Fudge while he was waiting on a park bench next to the station for someone to pick him up. It can be quite a busy part of town, as Sylvanians come and go to the train station and the park.

A mother was taking her kitten to the park in a stroller. 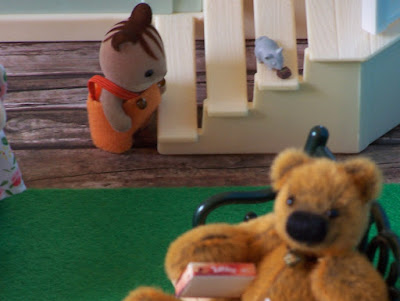 Little Ralfie Hazelnut stood at the stairs to the station, observing a mouse that was nibbling on a piece of dark chocolate. 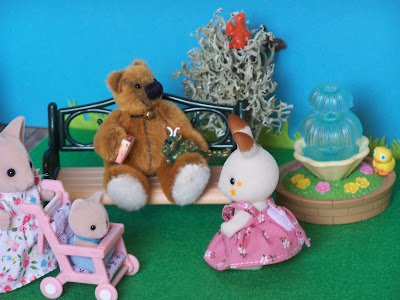 In a tree behind Fudge a squirrel was enjoying the sunshine. A young rabbit girl in a pink dress walked by. 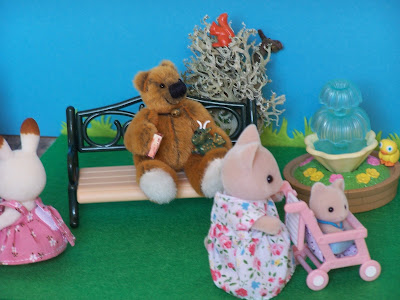 The sky was very blue that day. It made Fudge happy, so he sat there smiling. Next to the bench was a fountain. There was a yellow duckling sitting on the edge, watching the Sylvanians. 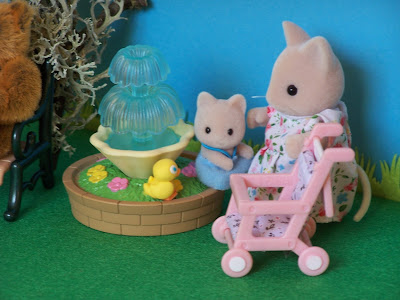 Mother cat sat her baby next to it. At first, the duckling felt a little anxious. Baby was very large and intimidating from the duck's point of view... 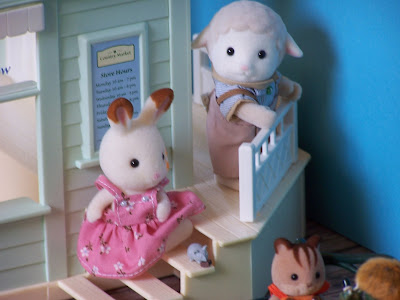 Meanwhile, the pink rabbit girl had taken a seat on the step next to the mouse and watched it finish its food. Mr Schaefer was also at the station. I believe he was waiting for a relative to arrive. 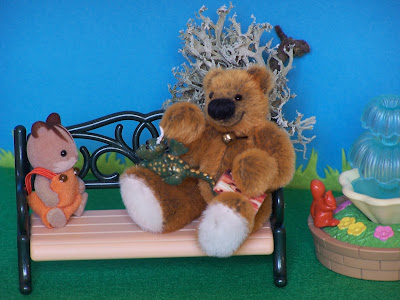 Then, Ralfie sat down next to Fudge. "What's your doggie's name?" he asked. "This is Pickles," Fudge responded, "He's my dragon." "Can I pet him?" Ralfie asked. Fudge nodded.

Pickles the dragon had come along with Fudge secretly. He hadn't even had a ticket for the train. Fortunately, no one except Fudge took notice of him during the trip, or they might have sent him back. They got along so well during the train ride, that Fudge had decided to keep him. 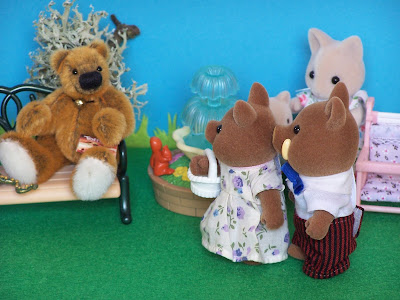 Finally, the Hogwarts arrived. What a special moment! 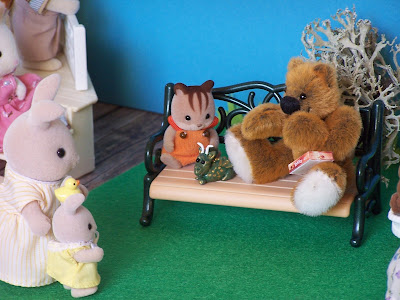 And there came Julie and Jemima Periwinkle.

Fudge couldn't quite believe what he was seeing. Was that a teeny tiny rabbit girl with a duck on her head? She was so cute, he had to rub his eyes to make sure he wasn't dreaming. 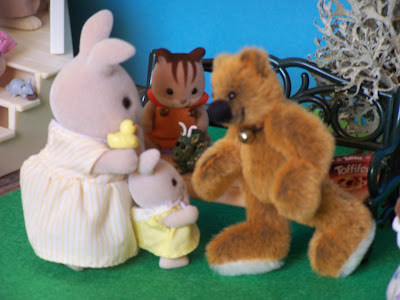 I bet Birgit told him over and over again to be polite when meeting his new friends, which is why he laid down his packet of toffees and got up from the bench to shake Jemima's tiny paw. 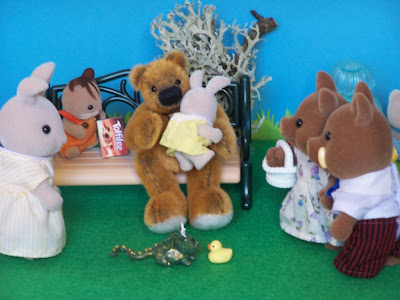 Oh, never mind! Forget the formalities! Why not a warm and friendly bear hug??
Pickles the dragon and Jemima's duck Quackie greeted each other, too.

Did you notice what went on in the background? Ralfie that little rascal snatched Fudge's packet of toffees and helped himself to a piece... 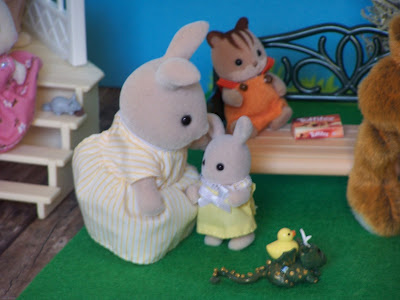 Meanwhile, Pickles had loaded Quackie onto his back and was carrying her back and forth along the grass. 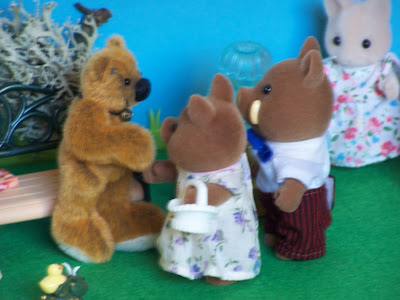 "A pleasure to meet you, Fudge! We've heard so much about you!" Hester said warmly and Hamish snorted in approval. 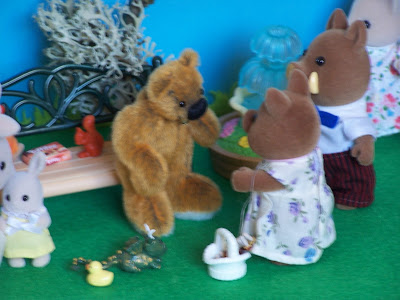 Then she took something from her basket. She had made a garland for Fudge as a welcome gift. But of course Hester wouldn't be Hester if she hadn't made her own version of a flower garland. Actually, there aren't any flowers on it at all. Instead, she has strung together a bunch of ceps. 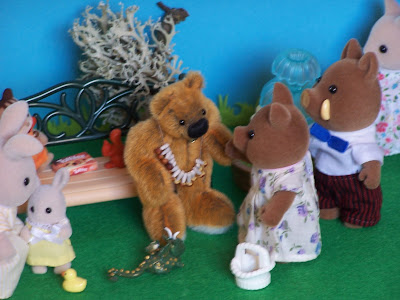 Pickles watched enviously as Hester hung the mushroom garland around Fudge's neck. Even from down there Pickles could notice its smell of earth and wood.

"Oh dear," said Hester apologetically, "I didn't know you would be accompanied by your pet dragon, or I would have made a necklace for him too!" 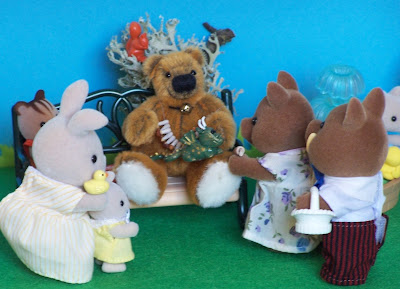 "I do have one loose mushroom inside my basket though!" said Hester as she offered it to Pickles. Pickles smiled happily but was too shy to say anything.

They spent a lot of time in the park talking and introducing Fudge to all the passersby. 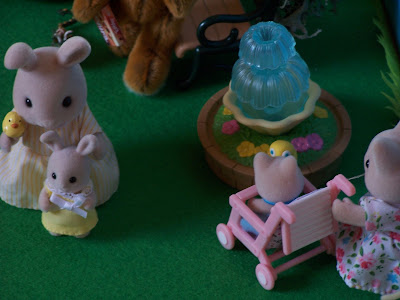 When it started to grow dark, they accompanied Fudge to his new home. Julie and Jemima walked ahead. 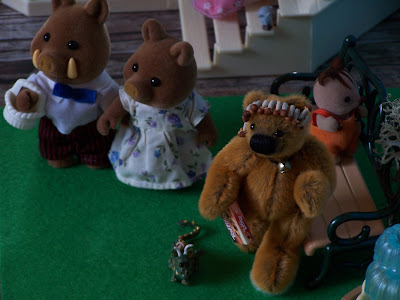 Then came Fudge, Pickles and the Hogwarts.

Pickles carried his welcome gift proudly between his wings. And no, Fudge hadn't suddenly grown a fringe, he just thought the mushroom garland would make a lovely headpiece.