Dragon in the Loo 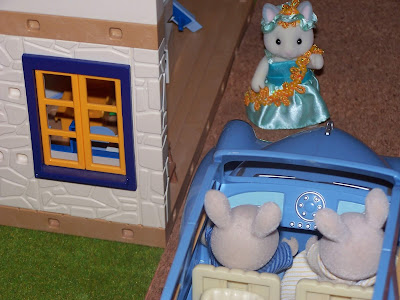 On our last evening in Tuscany James and I went for a short car ride to fetch some groceries we needed for the trip home. We left Jemima and Hippolina with the hotel babysitter.
As we passed by the wonderful house we had so often seen during our picnics,  a lady wearing a turquoise party dress waved at us, asking us to stop the car. Although she looked ghostly pale, she was stunningly beautiful. 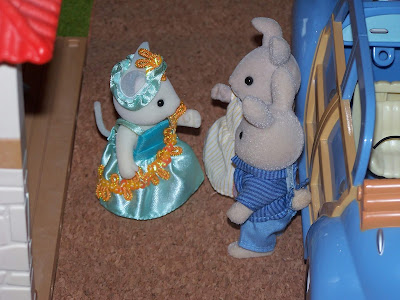 "Buona sera, I am Donna Valentina, and you are the people who wanted to look at the house!" She told us, and it sounded as if she were stating a fact, not asking a question.

"Well, yes!" I said. "We have been on holiday here for two weeks and have had several picnics on the meadow just behind the house. We have admired it every time..." 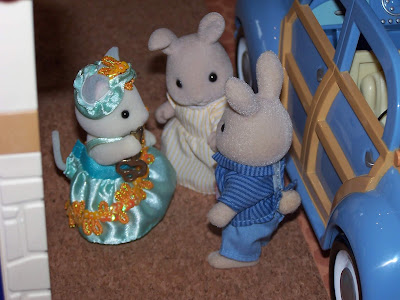 My joy turned to disbelief when all of a sudden she took a large copper key from a pocket in her dress and said, "I am the owner of this house. I will show you around, and if you like it, you shall be the new owners!" Then she smiled at us and giggled like a child entering a toy store.

"She's a madwoman!" I thought to myself, and when I looked into James's eyes, I was astonished to realize that he didn't seem to be thinking the same thing at all.

Instead, he nudged me and said, "Isn't this perfect? You've been staring at the house longingly ever since our first picnic. Now we can see it from the inside at last. Let's go!" And we did. 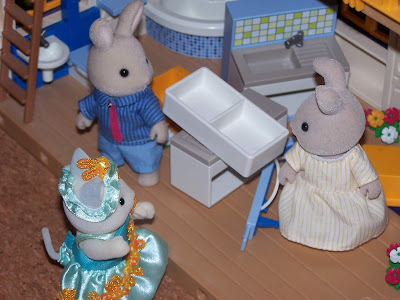 It was a shock to see how cluttered and dirty it was on the inside. The kitchen counters were placed crookedly and there were flowers growing from cracks in the parquet floor.

"The house has been empty for too long! Much too long. I cannot live here, it is haunted you see. I am afraid, but I know, you two are not. Look at you, two young and healthy rabbits, just perfect for this place." 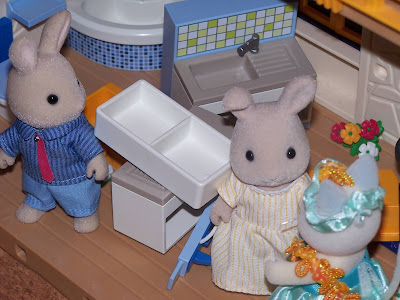 "What do you mean - this place is haunted?" James asked Donna Valentina. He was frowning.
With a grave voice Donna Valentina replied, "There is a dragon in the loo and three ghosts and a devil on the second floor." 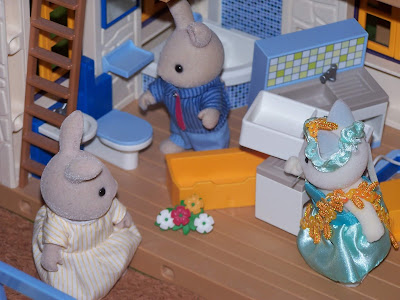 "Alright then," James sighed, thinking - as he later told me - that the lady must be a madwoman, "let me have a look at this dragon." And he moved toward the toilet bowl to pick up the lid.

"Oh no! Not now! The dragon will attack us!" Donna Valentina cried with a look of agony on her face. But James had already lifted the lid. 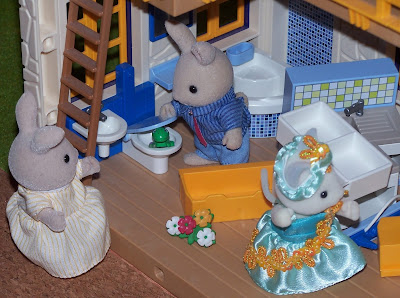 His irritation with Donna Valentina turned into laughter as he saw what was looking up at him. It was an exceptionally large and very green lizard.

Donna Valentina had turned away and was trembling from head to toe.

"It's a lizard, Donna Valentina!" I said to her. She turned her head slightly and said, "Yes, I told you, dragon!" 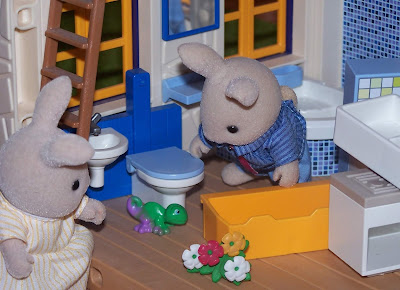 "Hello there!" James said to the animal, "looks like you were imprisoned inside a toilet bowl. Sorry about that. I will carry you into the garden now." And he did. 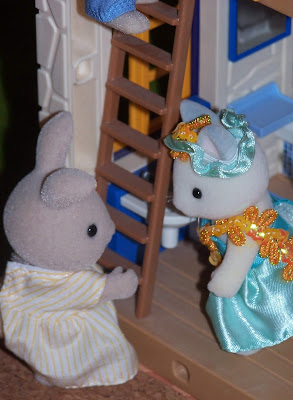 After that, James and I wanted to see the rest of the house, too. We could certainly see the potential this place had. I was just starting to follow James up the ladder to the second floor, when Donna Valentina wailed, "Are you sure you want to go up there? There are three ghosts on the second floor and a crouching red devil! Wait until the morning!"

"I'm sure it'll be alright," I tried to soothe her. "I'm certain my husband can deal with these... ghosts." 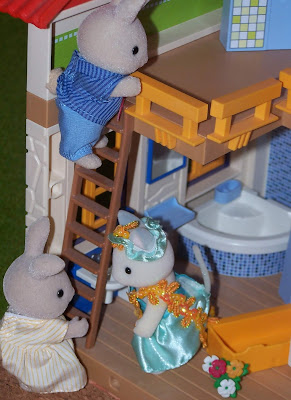 She looked at me doubtfully as I started to climb and started to plead, "Take the house keys, Signora Rabbit, and come back in the morning... With strong workers... carrying spades... and axes..."

I pretended not to hear that last part and followed James onto the second floor. 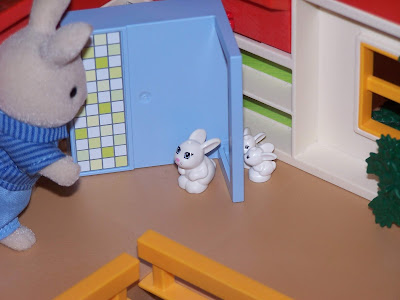 "Oh hello!" James said to the long eared ghostie. The mother rabbit seemed to stare at him defiantly, but he understood. She was only protecting her two little long eared babies. 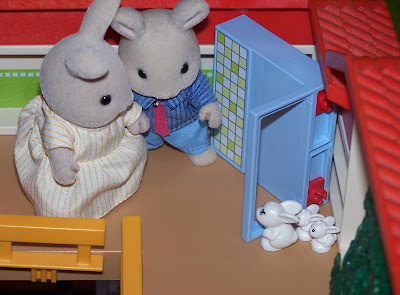 "It's just a family of white rabbits" said James as I joined him on the second floor. "Oh dear," I said, "they seem even more afraid of us, than Donna Valentina of them!" I joked. 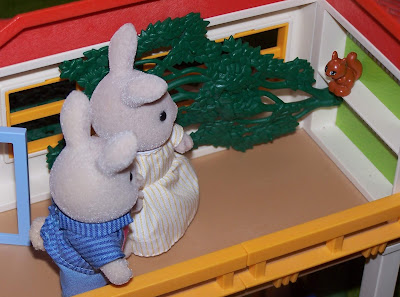 We continued to walk towards the corner of the room where there was a large broken window facing the meadow. There was an enormous green plant growing on the inside of the window and a small animal was huddled between the shelves in the back. 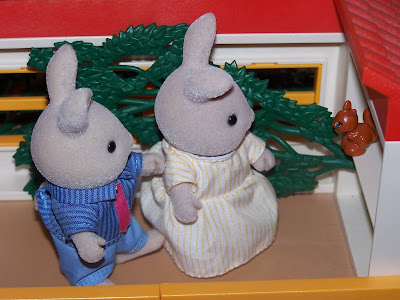 "James, don't tell me this is the red crouching devil!"

James chortled, "I believe it is, my darling." And to the squirrel he said, "Hello you! Nice to meet you." 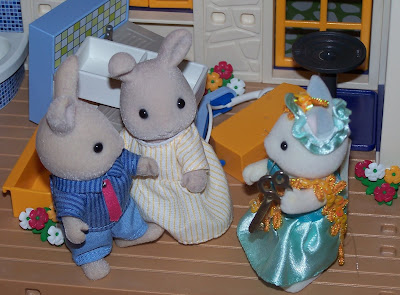 Back downstairs Donna Valentina held out the key to us.

"So, you have exterminated the ghosties and you buy the house, yes!" Again, it sounded more like a statement than a question.

"We'd be buying a house from a lady that is possibly mad and also hates animals... but I looove the house, James!" I whispered into my husband's ear. James agreed and, in a loud voice he said, "We have decided to buy the house as a holiday home." 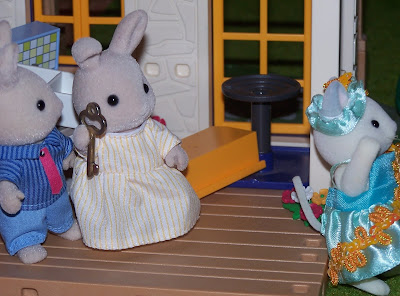 "Yippeeeee!" Donna Valentina exclaimed. Then she thrust the key into my paw and ran off into the night. 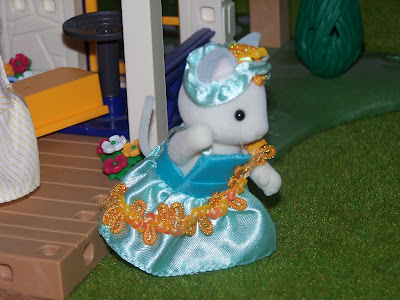 "I will send you the paperwork in the mail!" she added and ran as fast as her legs would carry her.

It was the last time we saw her. 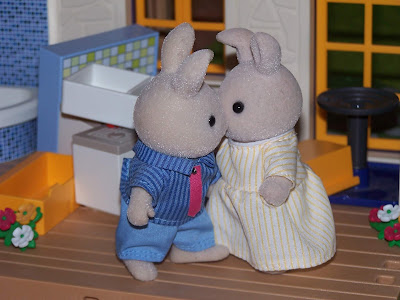 "I'm so excited, James! I can't wait to renovate the house on our next trip! It's going to be the most beautiful house ever!"

"I know, Julie, it's going to be amazing," he said, leaning in for a kiss, "a holiday home and five new little friends! Let's go tell the girls!"

Have a pleasant Sunday and a wonderful week!