A Picnic in Tuscany 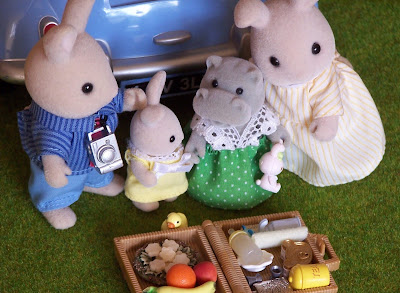 Hello everybody, it's me, Hippolina!

I was sent to Riverside from Birgit in order to have a better life. Soon after my arrival, the townspeople decided to let me try out family life with each family for several weeks, so that I can decide with whom I would like to stay in the long run.
Currently, I am testing out the Periwinkles. They are four very friendly people - James (the father), Julie (the mother), Jemima (the baby girl) and Quackie (the duck). 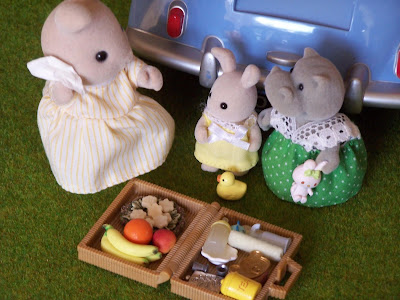 Believe it or not, but we are on holiday in TUSCANY and currently preparing to go for a picnic.
Julie is running around with a handkerchief in her paw. No, she isn't crying, she is just trying to wipe away her sweat.

"Is there anything else that needs to go in the suitcase?" she asks. Jemima and I shake our heads. 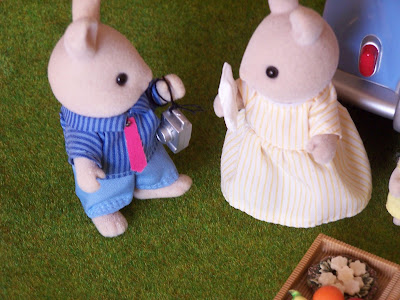 "Just the photocamera here," answers James, holding it up by its strap. 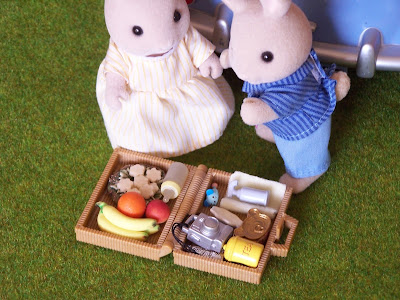 "Alright, that should fit inside," says Julie. I am a little surprised, because the trunk looked full to me already.
There is a plate of biscuits in there, Jemima's baby bottle, three bananas, an apple and an orange, the cats' water bowl, their toy mouse and a tin of cat food, a yellow thermos filled with ice tea, the flask James got from Tuomo and which he has filled with apple cider, two matching silver cups, a towel and a bottle of paw sanitizer. 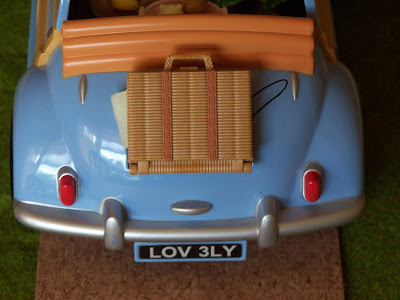 Apparently, it is a Mary Poppins type trunk, because everything fit inside perfectly, believe it or not!! 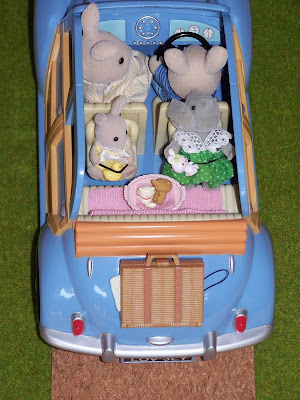 When all our baggage is tucked away and Jemima and I are strapped safely into our car seats, the journey begins!
Jemima was really nice to me before we went abroad and asked me whether I wanted to take one of her toys along for the trip. I chose Sally, a pink rabbit with a green bow. Now Sally accompanies me everywhere. 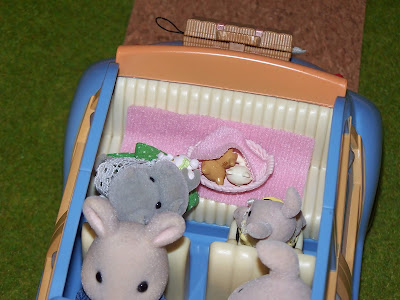 Believe it or not, but the Periwinkles' kittens Pip and Molly aren't very keen on driving today and at first they seem really scared and confused and hide underneath the blanket of their basket. 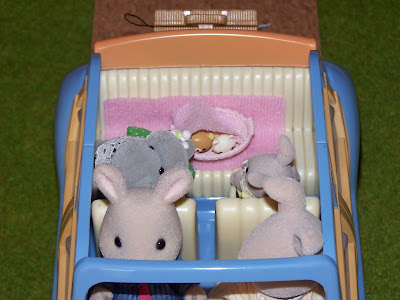 After a while they stick out their noses and look around the car. 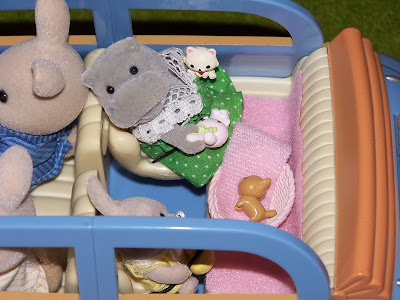 And a little while later they act like the most experienced car passengers ever. Molly is cuddling up against me (believe it or not!!) and Pip is doing what he likes best - taking a nap. 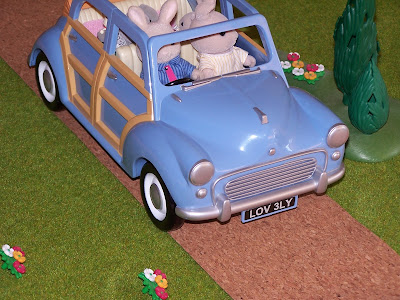 We drive and drive and drive a little more. Julie makes a comment about the beautiful italian countryside and the gorgeous Mediterranean cypress trees. Suddenly she cries "stop!", because she has seen the perfect spot for our picnic and so James parks the car. 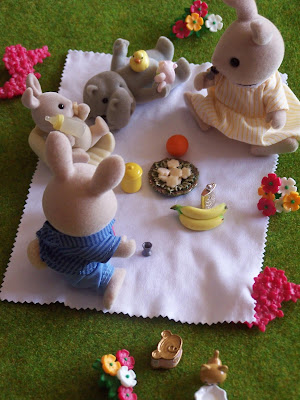 It's a spectacular place for a picnic, believe it or not. There is a wide green lawn with colourful flowers on it. We place a white blanket on top of the grass and everybody gets to eat and drink something. 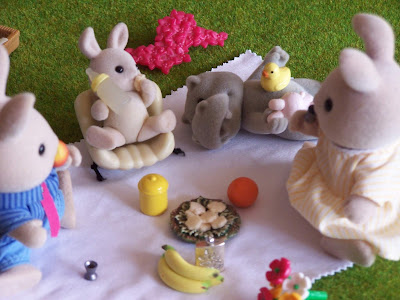 It's VERY hot, so Jemima and I have taken off our dresses. I need to rest for a little while... Trying out a new family and being on holiday - especially in another country - is a strenuous business. You never know what great thing is going to happen to you next. Quackie does her sport for the day by jumping on my stomach. 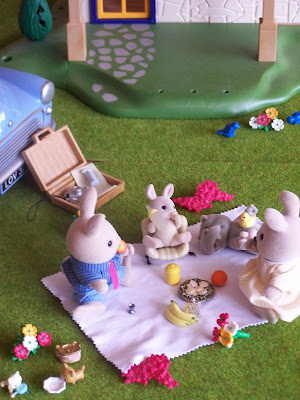 There is an empty house next to where we are having our picnic. It seems to have caught Julie's attention. She is always looking at it while sipping her apple cider. 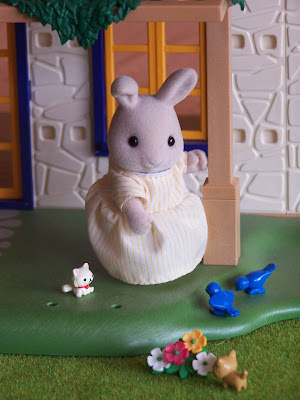 After a while she gets up and checks out the veranda. Molly and Pip follow her. 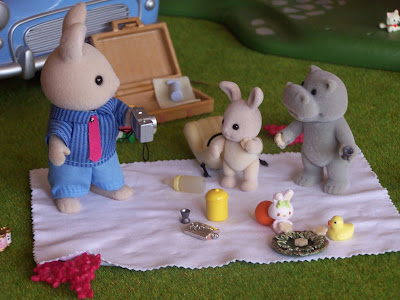 James starts to take photos of Jemima and me. We are eating the cookies the Periwinkles got from Siiri and Iivari and they taste like heaven, believe it or not. 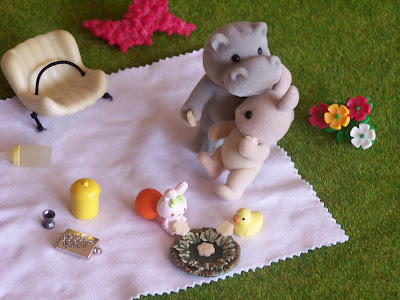 James wants to take a picture of Julie on the porch. As he gets up, I give Jemima a big squeeze, just because she's so cute and fuzzy and really nice to be with. 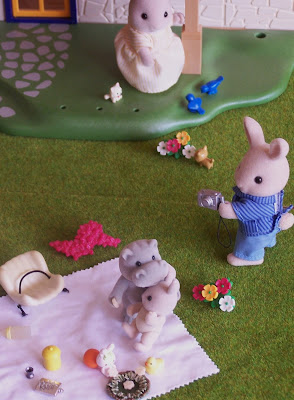 Out of the corner of my eye I can see that James takes a photo of that, too. 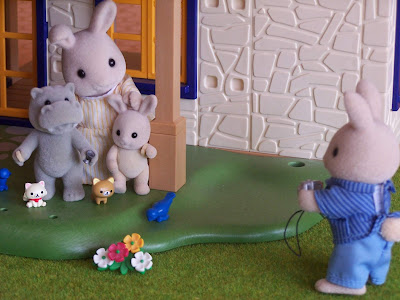 Then he takes a photo of the two of us with Julie on the veranda. The cats have joined us also. 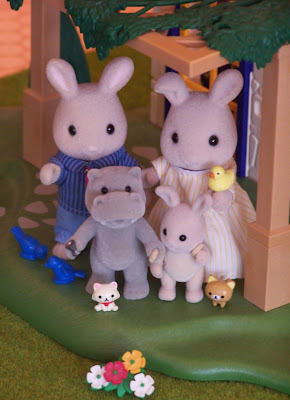 A villager comes by and takes a photo of us all.

I don't mind people taking pictures of me, but I don't think I'll need any copies of these, because I'll never ever, ever forget this wonderful trip with the Periwinkles - believe it or not.

Hope you have a restful Sunday and a very successful next week!