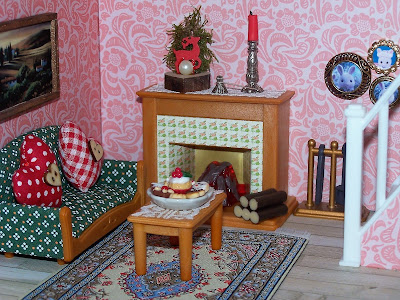 It's Christmas Eve at the Periwinkles'. They just popped outside to have their picture taken on the town square by a professional photographer. This gives us a chance to snoop around... 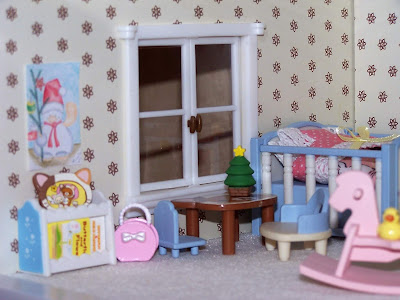 Jemima has decorated her room with a little green christmas tree and a drawing of a happy penguin. 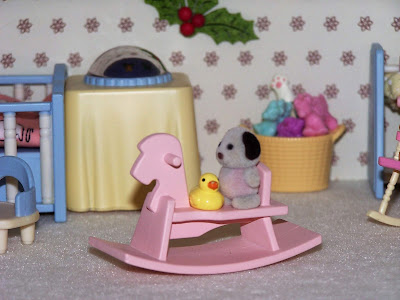 Quackie and Button are wondering how many gifts Santa is going to bring them. Button was very good this year. Quackie not so much... 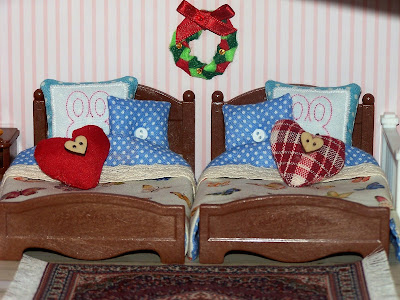 The parents' bedroom is decorated with a beautiful wreath that Cutata from Sweet Berry Valley made last year. On the bed are some heart shaped pillows and the cute and very comfortable rabbit pillows they received last christmas from Sarah at Magic Mayhem. 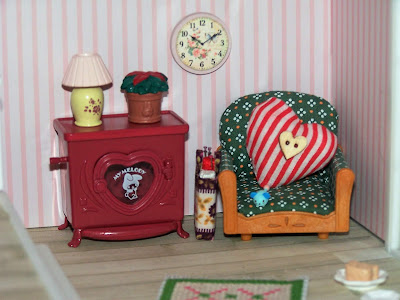 Julie didn't have any time to knit before christmas, because she was too busy baking and cooking. The bag of wool that she got from Marianne last year is standing next to the armchair in the reading room. 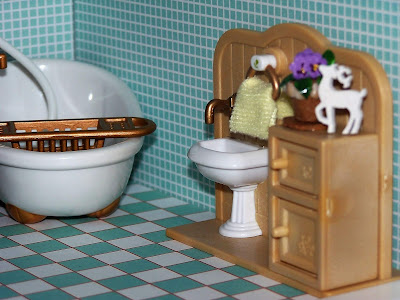 In the bathroom is a little white deer ornament next to the pot of Drora's pansies. James Periwinkle takes very good care of the flowers all year round. 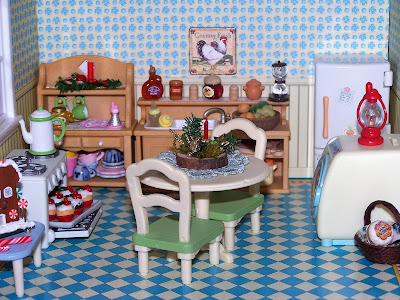 Here we are in the kitchen. Looks like Julie baked some delicious christmas cupcakes! 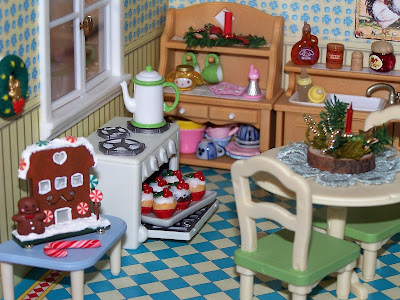 On the little blue table is a gingerbread house made last christmas by Birgit. 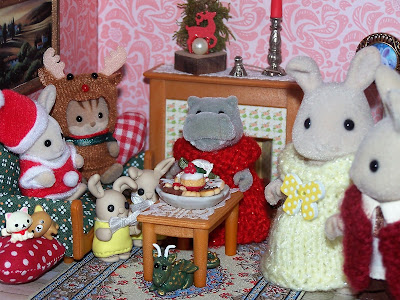 Seems like the Periwinkles and their friends are back from the town square and in the mood for unpacking presents.

Jemima is dressed up as Santa and her friend Ralfie as Rudolph. Jemima's cousins Billie and Jillie are there too, as well as Hippolina, Fudge and Pickles. 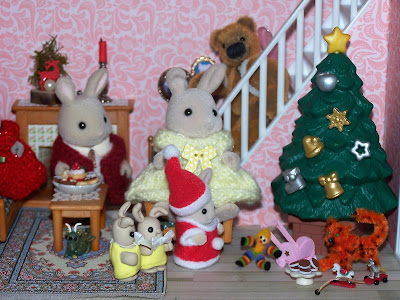 There have been rumours all around town that tonight different Santas from all over the world are bringing presents to Riverside.

It seems like they are true! The very first Santa slipped through the chimney while no one was looking and brought presents from Drorasminimundo in Israel. They were delivered without wrapping paper. Jemima is very happy about this, as it means there will be less time spent unwrapping and more time spent playing! 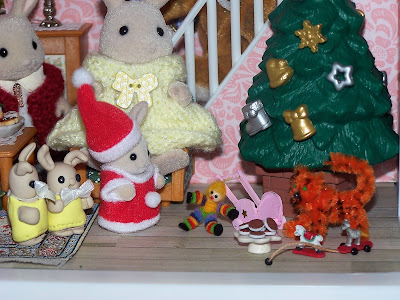 The presents include a colourful dolly with movable arms and legs, a white cake stand with freshly baked chocolate cookies on top, a miniature red and white rocking horse, a giraffe (with real hair!) on a wagon, the most precious pink stroller Jemima has ever seen, and a new (feline) addition to the family! 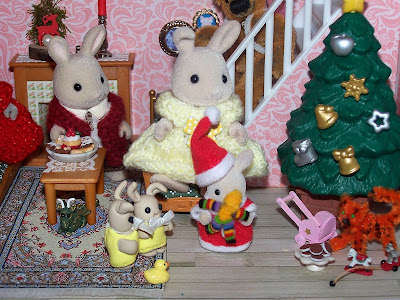 The doll jumps into Jemima's arms immediately. She is happy to have a mommy now. 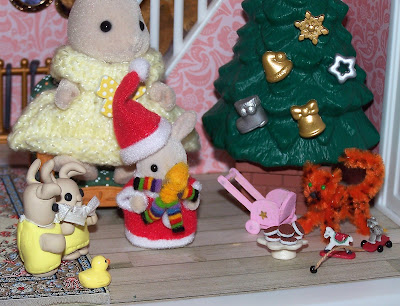 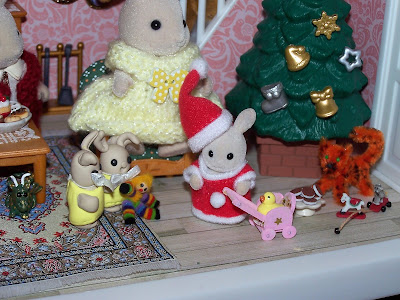 And Quackie is proud as can be. No more bothersome waddling around, she says to herself. From now on she will be pushed from A to B like the V.I.D. that she is. 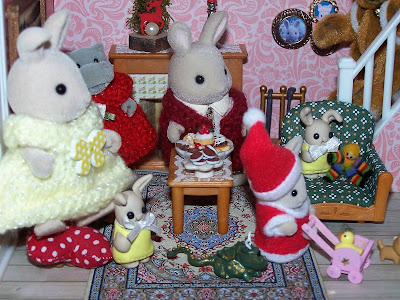 (In case you didn't know, V.I.D. is short for Very Important Duck.) 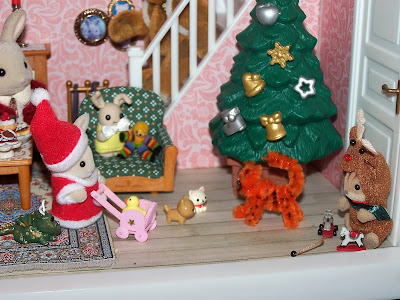 The toys are great and Jemima invites her friends and family to play. Billie takes the dolly next to her onto the armchair and Ralfie says hello to the horsy and the giraffe.

Pip and Molly and the new cat are getting acquainted also. 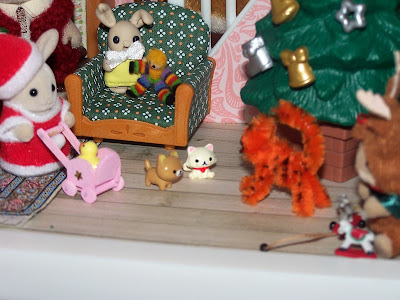 Jemima quickly decides that she should be called Pumpkin due to her orange fur. Pumpkin purrs in agreement and Pip and Molly stare at her with curiosity. 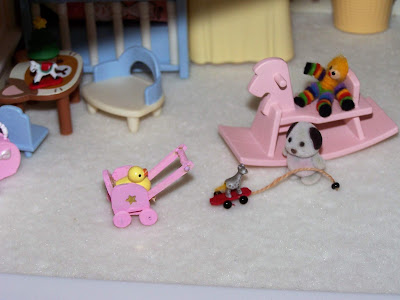 Drora's presents are THAT great, that Jemima's toys even play together in her room now when Jemima isn't there. 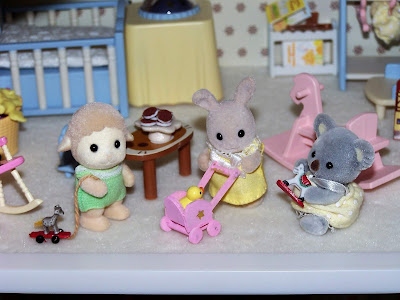 And it is always great fun for Jemima to play with them with a group of friends.

💝 Thank you, dear Drora, for these precious little handmade treasures and for being such a good friend to Jemima Periwinkle and me. 💝