Tales From the Yard 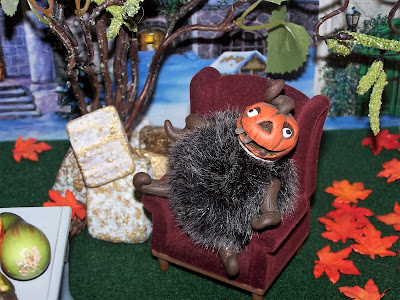 It was Wendelbert Wolperting's favourite time of the year - October. 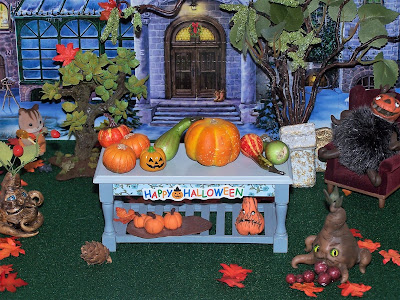 He had organised a pumpkin sale in the front yard of Riverside's empty Victorian mansion. It was said to be haunted, so what better place for a pumpkin sale?

His friends Matthäus and Matilda Mandrake were there too. 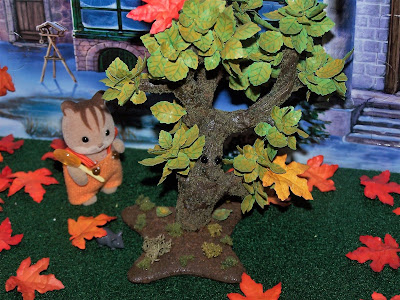 Little Ralfie Hazelnut was there also. He was enjoying some Halloween candy and getting acquainted with Woody, the friendly tree. 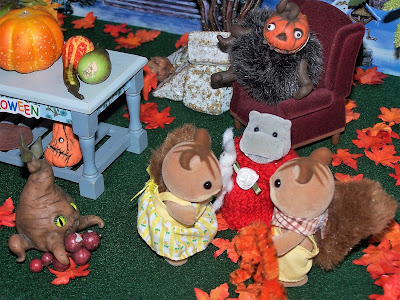 Soon Rona and Joey and Hippolina came by too. They had heard that Wenderlbert was telling scary stories that evening. They couldn't wait to get scared. 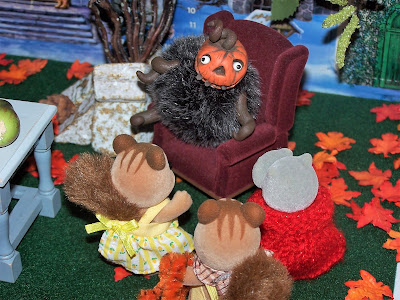 "Come close enough so I can WHISPER this story to you, because it should not be told with a loud voice. It should better not be told at all... But, since you are all here... I will begin.

Once upon a time, there was a town by a river. It was a lovely little place full of friendly townfolk and goodlooking pumpkins.

Right smack in the middle of the town stood an old dark mansion. People had been telling stories about it for decades. That it was haunted, that it was inhabited by monsters, that it was CURSED." 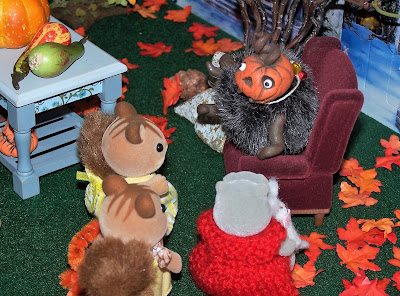 "Nobody believed the stories. The children heard them from their parents and told them to their younger siblings, but nobody really believed that there could be anything wrong with an old, empty house.

Until, one day in October, children from the neighbourhood began to go missing. Nobody knew where they went. There were never any clues and each case was different. One child disappeared on its way to school. Another was apparently snatched out if its pram while the mother was standing right next to it, talking to a friend. Another child went to the market to get some carrots for dinner and never came back.

Soon, nobody was allowing their children to go out alone after dark. Or to go out at all. Children had to be accompanied by an adult or stay at home. Some children got seriously ill from boredom," Wendelbert said, rolling his eyes around inside his pumkpin head in a threatening manner.

Rona, Joey and Hippolina almost peed their pants. What a SPOOKY story. 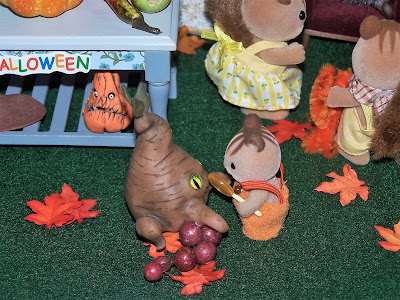 Little Ralfie wasn't listening, though. He was busy sharing his lollipop with Matilda Mandrake.

Some time later the children went back home. Skin full of goosebumps and panties wet with fear of the child-eating monsters living in the mansion.

Was Wendelbert's story real? Could he have been talking about the mansion in Riverside? Were BAD THINGS going to happen?? Such was the effect of Wendelbert's story on the children that after trembling themselves to sleep they had the most fantastic dreams about ghosts and blood sucking vampires and houses that came to life.

Later that same night at the mansion, after everybody, including Wendelbert, had left... 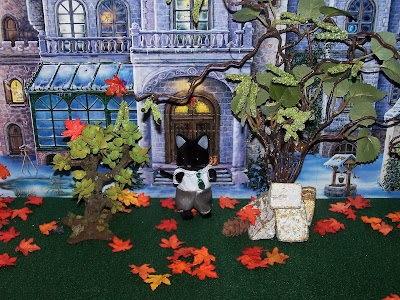 A Sylvanian came out the front door of the mansion. He looked like a black cat wearing a suit and tie. 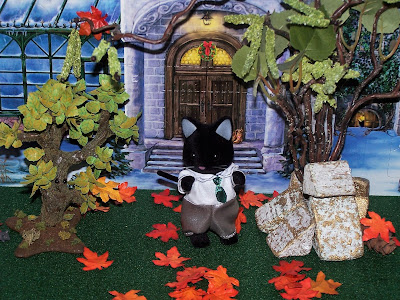 Nobody had oficially moved into the mansion, so what was he doing there??

He started to hum and then sing a little tune that went like this:

"Halloween, oh what to do?
Cook a pot of witches' brew.
Pop some children in the pan
Fry them just because I can

Halloween, oh what to do?
Boil a pot of childrens' brew
Steam them 'til they're soft as fudge
Mix some snails into the sludge..." 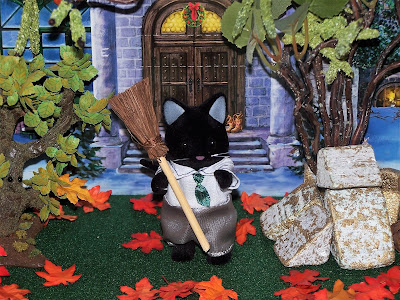 Suddenly, as if by magic, a broom appeared in his paw. Was he a wizard, just like Hester Hogwart was a witch? Or was he someone sinister, preparing to steal and eat all the little children of Riverside? 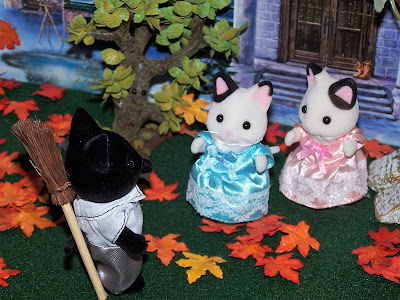 "Stella! Anne-Marie! Friederike! Let's go, my darlings!" he called out behind him. 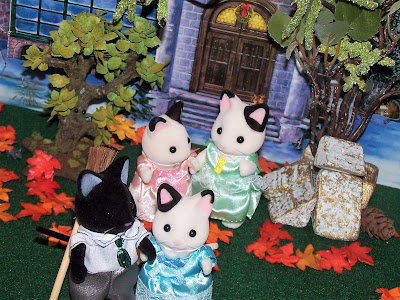 There was a mother cat too. The elegant Friederike. She was wearing a dress just as fancy as her daughters.

These were the Ghostly-Whites and they had just arrived in Riverside that week, unbeknownst to anyone. 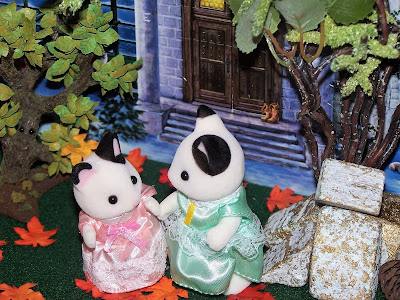 "Mommy, I can't wait to fly together on Daddy's broom tonight," Anne-Marie said to her mother. "I know, dear. It's wonderful weather for a moonlit flight." 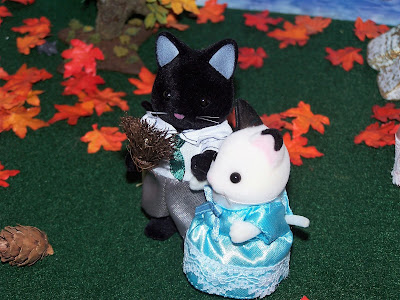 "See that very large, very bright star right over the old oak?" Silvester said to his dautghter Stella while pointing into the direction of the star with his broom. "That's the cat star and the direction in which we are flying tonight." 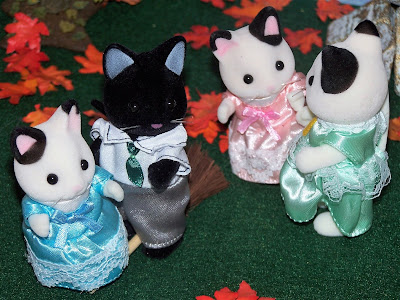 Silvester was murmuring a spell so that his broom would grow and all of his family would fit onto it. Stella had already taken a seat. She loved to sit in front. Anne-Marie was looking forward to the outing too, but she was a teensy bit afraid of heights, so she was glad to sit in the back. 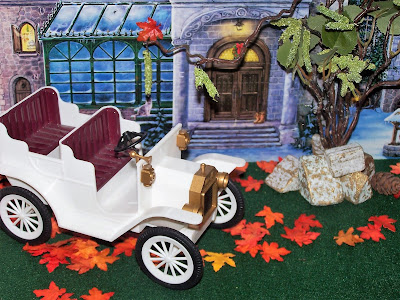 There was a beautiful antique white car standing in the front yard of the mansion, on the spot where Woody the tree had been growing. Apparently, the Ghostly-Whites had moved into the mansion for good, but they had kept to themselves, so still nobody in Riverside knew about it.

What had happened Woody the tree? Where was he? 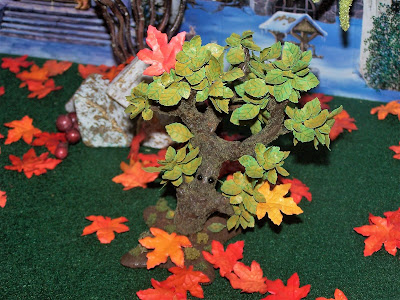 Oh, there he was! Woody was apparently "walking" around the garden that day. I guess that's because he was a wandering tree. 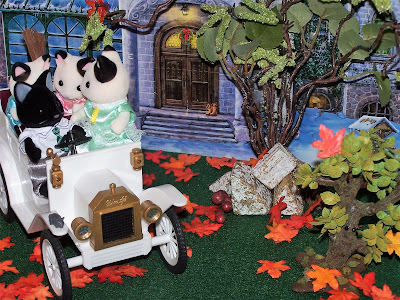 The car was soon filled with Silvester and his family. "Put your seat belts on, my dears", Friederike appealed to her daughters on the back seat. 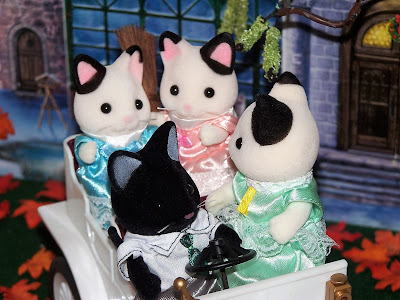 "Can't we just conjure it on, Mommy?" Stella asked on behalf of her and her sister.

"No, dears, I don't want your magic powers to turn you into lazy little sloths. So please put your seat belts on with your own two paws." 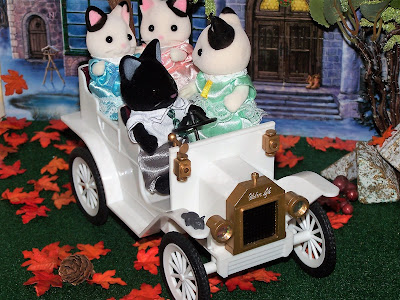 And off they went, and I am pretty sure they drove someplace special, because the little grey mouse was sitting on top of one of the car wheels and I don't think she would have gone along to any place less than interesting.

THANK YOU ALL IN ADVANCE FOR YOUR LOVELY COMMENTS

AND HAVE A WONDERFUL WEEK!!!