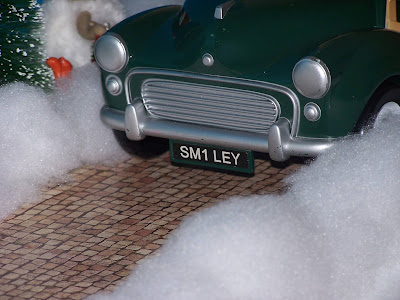 On the same day another well-known family went for a drive. 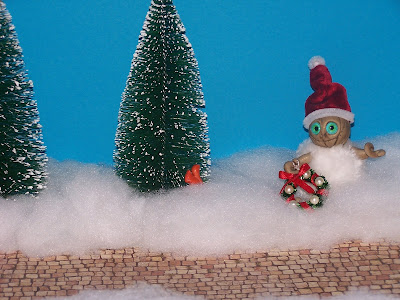 There was a friendly zombie snowman on the side of the road that hadn't stood there before. Even though christmas had long passed, he was wearing a santa hat and holding a christmas wreath in his right tentacle. 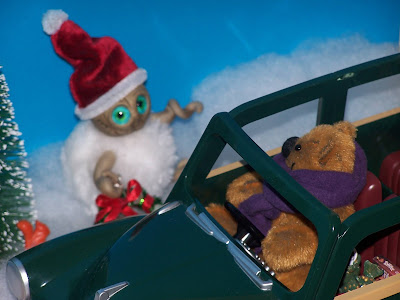 "Hello! Do you need a ride?" Fudge asked the snowman. The snowman smiled and declined.
Maybe he was waiting for the sun to get a bit warmer and melt him, so he could get some rest until next winter? 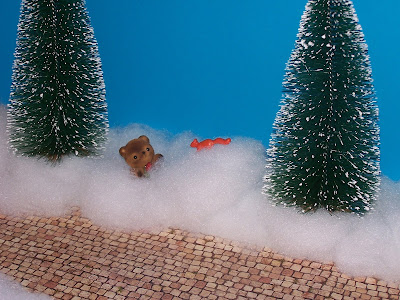 The squirrel from earlier was there too, but this time he did not seem to be in a rush. 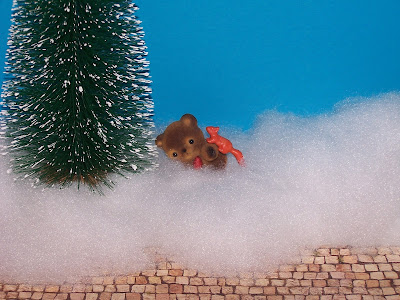 He chattered something into the ear of a chubby little bear cub.

"Don't you just love Riverside's wildlife, Pickels?" Fudge said to his dragon friend inside the car. "There are always interesting animals to admire, as soon as we leave the house."

Pickles nodded. He didn't care much for wildlife, though. Longingly, he sniffed at the packet of toffees that was tucked behind him on the seat. He knew that Fudge would probably want him to wait with snack time until they had finished their errand. Why? Because Fudge had started the new year with something really stupid... so-called "good" resolutions!

Ew. Pickles did not like them at all, because they had to do with awful things like eating three packets of caramel a day instead of four, brushing his teeth before bed and washing behind his ears. And Fudge expected Pickles to do the same. 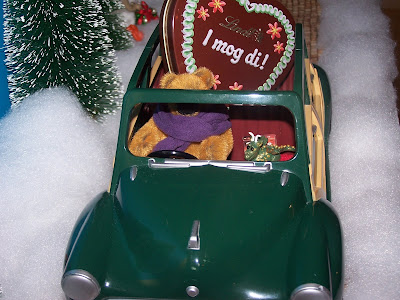 Today, Fudge was planning a surprise for me! He was driving to my house to gift me with some chocolates from Lindt. Wasn't that a sweet idea? Especially, since it wasn't Valentine's Day, Easter, or my birthday. Fudge was simply being attentive. 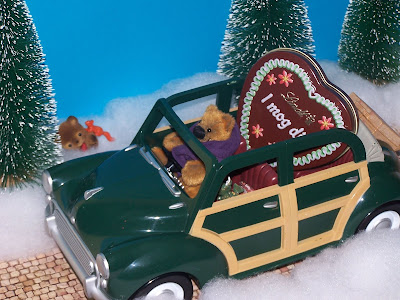 Fudge passed by the chubby bear cub and Mr. Squirrel. 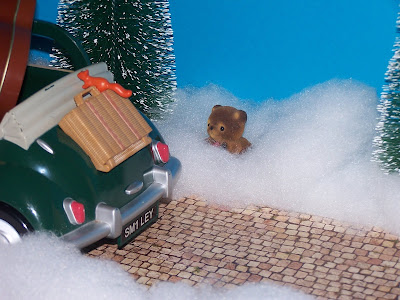 The squirrel hopped from the bear's shoulder onto the back of Fudge's car. So that was why he wasn't in a hurry anymore. Apparently he had thought up a way of saving time by hitchhiking.

A little while later Fudge arrived at my house to give me the Lindt chocolates. They were delicious and I thanked him and it was all very touching, because I had never before been gifted chocolates on a random day by a tiny little BiWuBear before. 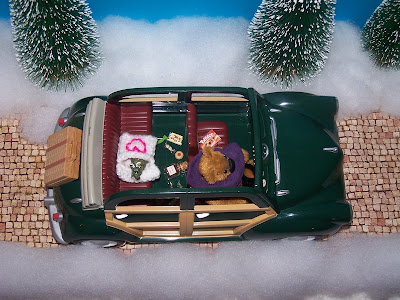 On their way back, Pickles was lounging on the back seat of the car inside his woolen sleeping bag, burping happily. There were cookies and chocolates and fudge and sweets scattered across the floor in front of him. 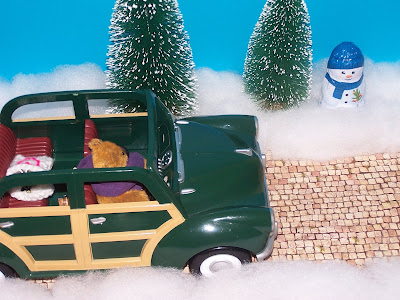 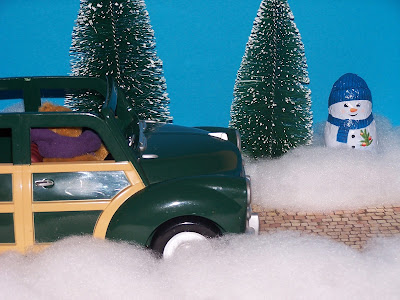 This one was definitely hoping to get a free ride. Fudge could feel it. 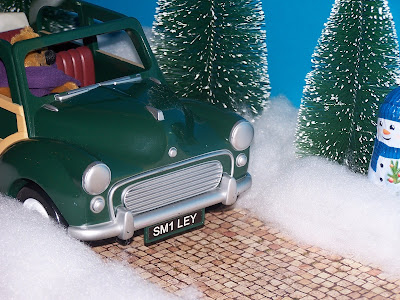 He didn't look like a friendly tentacled zombie snowman, though. Just friendly. 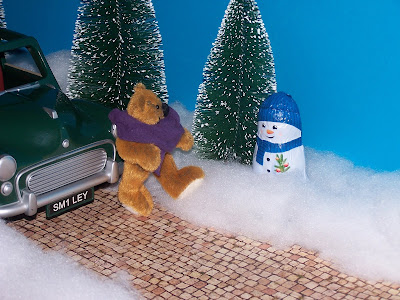 Fudge got out of the car and walked up to the snowman, smiling. The snowman smiled back. 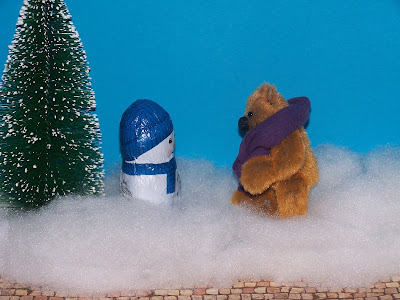 "Hello, how are you? Do you need a ride?" asked Fudge.
"Um..." the snowman stuttered awkwardly. "Actually, I was looking for somebody... anybody... interested in chocolate. My best before date is about to expire. You see, I am a leftover from christmas and nobody wanted me." 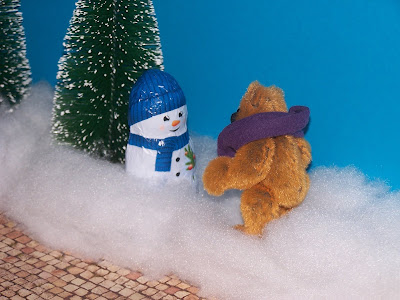 Fudge was struck by the snowman's candour. He was now in a rather serious dilemma, though. Several dilemmas.
On the one hand, he liked chocolate very much. It was his favourite food after fudge and caramel. On the other hand, he had made a new-years resolution which he wanted to stick to.
Also, he had never eaten anyone whom he had had a conversation with! 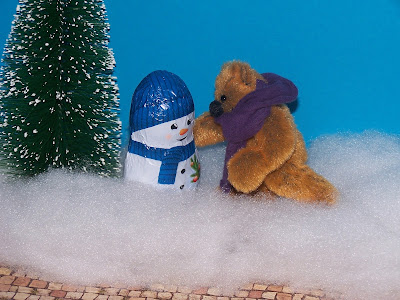 Finally, Fudge patted the snowman on the shoulder and said, "Would you like to come home with Pickles and I? We could forget about your best-before-thingy and spend some quality time on the sofa during the next few days, reading books and having lots of hot milk and fudge."
The snowman seemed to ponder this for a while and then he exhaled and laughed out loud simultaneously and said, "Okay, let's do it!! I knew this was going to be my lucky day. But I had never imagined anything like this... Are we friends now, Mr. Bear?"
"Sure, we're friends!" Fudge replied happily.
"And my name is Fudge, by the way." 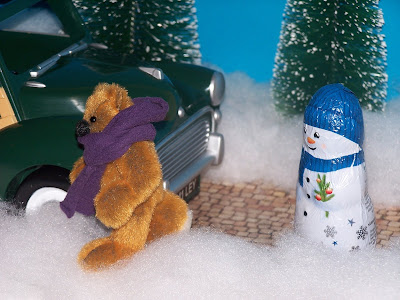 The snowman's name was Choccy.
Fudge could sense how excited Choccy was as he followed him to the car. 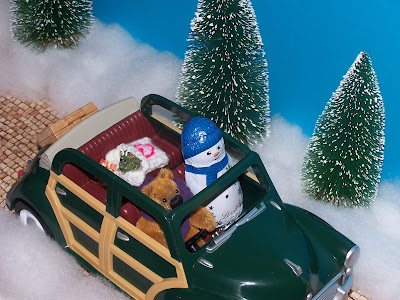 "Let's go home Choccy! Pickles and I will show you our house. It's called Caramel Cottage and I'm sure you'll enjoy staying with us. My warm milk with fudge is the best in all of Riverside, did you know..." 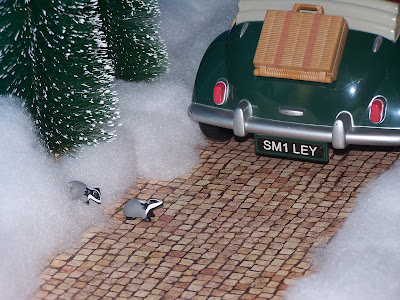 And off they went.
Sometimes I am a bit concerned at Fudges' habit to collect people off the road or from the forest and keep them as lodgers or friends at Caramel Cottage, but, fortunately, he seems to have a knack for meeting strangers that turn out to be really good people, as we were already able to find out in a post called "And the winner is... Fudge??".
Posted by Nina at 3/14/2021